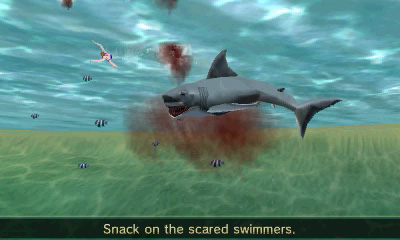 Majesco are ready to have gamers take to the seas as the great white himself shortly in Jaws: Ultimate Predator for both the Nintendo 3DS and Wii. With both versions slated for a “late November” release, new screenshots have now emerged to show us just what players can expect while playing as one of the most iconic movie mascots of all time.

I remember the Playstation 2 version of Jaws that was released a few years ago, and while I certainly enjoyed that title for what it was, this new re-imagining looks to be full of everything that it’s predecessor was lacking. Eating innocent swimmers? Check. Taking on small boats? Check. What makes this release even more interesting is the rating, as the 3DS version has been given a very bold “Mature” rating, which means we should be in for a bloody good time.

Everything looks campy and satisfying so far for Jaws: Ultimate Predator, and you can see the game in action for yourself in the new Wii and 3DS screenshots below.