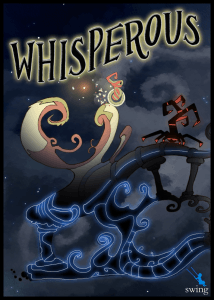 Independent developers are increasingly demonstrating their importance to the video game industry, and often outperform the big boys in creativity and innovation. With the Australian industry in the state it’s in, indy devs are arguably more important than ever here.

I spoke to the Project Manager, Nina Nikolic and Game Designer, Ben Rejmer, about their design process, the game’s reception, the Australian game community, and of course, the weird world of Whisperous.

Capsule Computers: What are the core concepts of Whisperous?

Nina: We realized our version of it wasn’t working, and then we heard of the game Polarity, and it was exactly what we were trying to do, except it was fun. *laughs*

Ben: So then, essentially we reversed the hinge of what it was all about. So the player stayed where they were, and things in the environment were attracted to or repelled from them. As soon as we got the prototype for that up and going, everyone went, “that’s our game”.

Story and setting have come later. We’ve kind of built everything for mechanics and not necessarily narrative, but we know other people do it differently.

Nina: We kind of have a background narrative for ourselves, but we don’t necessarily tell the player anything about it. It’s just some strange world. People keep asking us “what is your character?” and we… have no idea. If you know, please let us know so we can include it! *laughs* Because, we don’t know what to call him, we don’t know what the world is called, it’s just its own world, really.

Ben: Our background narrative is very very short, and it’s actually not something that we want to put into the game for the player. It’s more for us, so we can inform what things are and how they work in the world. But he’s actually invading. This very cute little guy, looks like he’s killing the nasty monsters, but in fact he’s invading, and turning this world into something more acceptable for all of his people. He’s a nefarious little bastard.

But that’s just for us, we’re still keeping it very cute, and open, and not actually pressing that idea of him much. But that’s kind of how we want to put it, all the bits within the world are interacting and interjoined, a little ecology.

Nina: It has its own ecosystem that he’s disrupting, essentially. But we’re not trying to show that! *laughs* 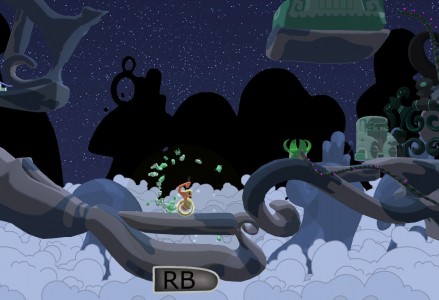 CC: How many people are involved?

Nina: We’ve got fourteen people in total. I’m Project Manager, we have three designers, four artists, three QA and two coders. There’s an audio guy who’s not at Qantm, he’s an external guy we got to do that, and one of the designers is doubling as audio as well.

Nina: Initially, the entire group sat around a table, throwing around ideas. We tried a few ideas, some didn’t work, some did.

Ben: Actually we went with one early on, and got absolutely flaming shot down. So we took an axe to it, chopped out everything and went back to what worked. So it just evolved.

Nina: From there, our process is that we try to work in sprints, which is really hard when we only get six hours together a week. It can be hard to be productive, consistently.

Ben: Most of the time when we are all in the one room, it’s a very very loose Valve-Cabal system. So no one’s excluded from any area, there’s no “This is an art thing, this is a level thing”. People ask the whole team’s opinion, and three or four people might get up and say what’s good or bad or whatever. It’s a loose ongoing Cabal thing, there’s no restricting input based on someone’s role.

Nina: We get to a point, and decide that something’s working now, we’ll refine it and get it polished, and see where it can go from there. Having regular public playtesting lets us develop something, test it, fix it up, test it again.

We might try to organise an open playtesting thing somewhere, but it’s so hard to get people to notice us unless it’s a specific event, like Armageddon or Freeplay.

CC: What kind of feedback have you gotten from people in the industry, and the testers?

Nina: Generally, the testers love the world, they love the character, they say it’s fun. Generally the things they point out are things we know need to be tweaked, like movement or not quite knowing what they’re doing. So those are the things we need to be fixing over the next six weeks.

It’s weird, the developers who help us out seem to overthink things. Generally the players will accept the game as it is, and they love it, whereas the developers are more like “why is this like this? Why don’t you make it like this?” and that might completely change the way the game works.

Ben: The main thing we wanted to do was test it with as many people as possible.

Nina: Yeah, the people who would be playing it if we were to release it, we wanted their opinion. With these kinds of projects, you get feedback from your mentors and your peers about what should be in there, but you never find out what the players want, so that’s where we took this.

Through our public playtesting, coming to Armageddon, going to FreePlay and the version on our website, we figured out that our target market was completely wrong. We were going the usual way, you know, “Xbox players who play Xbox Live, probably male and female teenagers to adults”, or something like that. But we found out through all this public playtesting that it’s actually parents and kids under ten.

The weirdest thing that we found is that kids between the age of about five to ten, don’t even want to know anything about it, they’ll just jump in, play through the same level six times and love it. They never screw up once, they just enjoy it and they can do it straight away. Adults who play our game will come up, grab the controller and ask, “Ok, what do I do now? Tell me exactly what I need to do.” Whereas kids will intuitively grab it, have a play, press some buttons and figure out what happens themselves. And they’ll just completely annihilate the game. 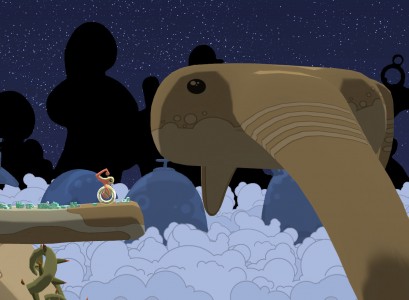 Ben: The other thing is that what we’ve heard from the public is – not always, but sometimes – at odds with what we’re getting from some of the industry people. Certain people say “it should be like this, this is the way it’s done”, and you go out and show the public and they disagree. So, I’d kind of go with the customer.

That’s something that a lot of uni game projects don’t have. They might never have kids or older people playing, just other students trying it out. They’d never get that outside view on it.

Nina: Exactly. That’s why we felt it was really important to do this stuff, and were willing to put in the money and time. Otherwise we would have come out with a game that was completely different to what we have now, and I really think it would have just ended up not being as fun.

Ben: Yeah, it would probably have sucked. *laughs* Not that what we’ve done is exactly AAA, but every time we show it, more people go “I really like this”. We get asked more often, “when can I go out and buy it?”

Nina: A lot of people are asking us when we’re going to release it and we have to be honest and say, we don’t even know if we will. This is just a student project, we can’t commit to the fourteen people on the project being around after the project’s done.

Ben: There’s a very good chance that we’ll just leave it behind.

Nina: Well, I’d love to get it as polished as possible and just leave it online for people to play, for free.

CC: So where would you like to take it, if you could?

Nina: In a perfect world, we would actually finish the game properly and try to get it on Xbox Live Arcade or something similar. But as it stands, we really have no idea what’s going to happen to everyone after the course finishes. So we’ll just have to finish the demo and keep it up online, as a portfolio piece, more than anything.

Ben: In terms of scale, if we finished it it’d be lucky to be any bigger than the likes of Splosion Man, you know, it plays for two hours.

Nina: So, if anyone from Valve is listening, and wants to do another Narbacular Drop-type project, we’d be happy to do that for Whisperous. Just sayin’… *laughs* I think that’s the kind of thing the players want, they’re asking us to finish it, we just don’t have the resources.

Ben: Yeah, but that’s sort of the game equivalent of the real estate agent from Tasmania, who has the Prince of Denmark roll up and ask to marry her. It can happen, but it only really happens once. *laughs* 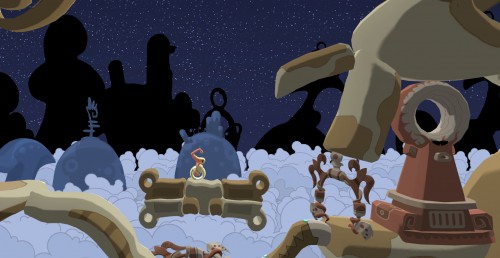 CC: Who in the industry is supporting the game?

Nina: At the moment, we’re just trying to get out there on our own. Qantm have helped us with putting information out to the rest of the Qantm community, on the student portal, getting people to try the game. I organised our Armageddon stand myself, and they offered to reimburse us for that, so that was fantastic.

IGDA (The Independent Game Developers’ Association) have been amazing, just letting us talk at the open mic nights, linking to our website now and again. Through IGDA, we have had contact with professionals, who are willing to give us more constructive feedback, from a development perspective.

Nina: For us, especially with the IGDA, everyone is so positive and helpful, and so supportive of everyone else. It’s fantastic. Even people who are already in studios are supporting the indy developers, and the students, they want everyone to get involved. To be honest, I’ve seen all these stories about the Australian game industry being… what was the word… “obliterated”! That’s so far out there.

Ben: It depends. If you look at just business figures, then yeah, it absolutely looks killed. But turn up to IGDA and the people who have just walked out of studios, who have lost their job, are all now going, “well bugger it, I’m still gonna keep on going”. The people are still there, and the initiative is still there, it’s just the American funding isn’t. So that won’t take long and we can turn that around, and fix it.

Nina: The hard thing is establishing our own big studios that can hold themselves together of their own accord, as opposed to being an offshoot of an American company.

Ben: Well, not necessarily big studios. The more successful Melbourne places, they’re all eight, ten people. And they probably won’t need to get much bigger than that. They’re little crews of people, that can work fast and work well.

Nina: They work efficiently, and they know how to make good games. That’s what makes them successful.

Nina: Well, maybe they can one day. That’s the problem, it’s the resources again. I mean, look at the entirety of Australia population-wise, compared to the US, and it’s kind of obvious, that we’re not going to have as much of a boom as other countries. But yeah, we love the community here.

Support Swing Interactive by visiting their site and downloading the beta, stalking them on Facebook or Twitter, or heading along to the next IGDA Melbourne meeting and throwing in your two cents in person.