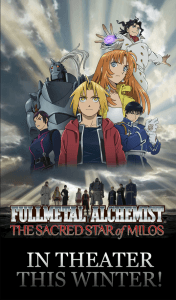 Following their announcement of a theatrical release of the upcoming Fullmetal Alchemist: The Sacred Star of Milos this upcoming Winter, Funimation have confirmed the voice cast for the film, which largely stays the same as the Fullmetal Alchemist Brotherhood english dub.

The english cast for the film is as follows:

As you can see Funimation have retained the cast of the Fullmetal Alchemist Brotherhood dub largely with a few new additions here and there. What do you think of this cast? Let us know in the shoutbox or comments section.