The highly successful cult-classic TV show Weeds has always been a favourite of mine. Why not? It’s a comedy about an apparent soccer mum who is actually a drug dealing, weed growing, loose morality-ed, woman stuck with a mortgage and limited options. So it’s not a huge surprise that Lionsgate (creators of the show) along with Ecko|Code wanted to capitalize on the popularity by combining it with something else hugely popular. Yes, Facebook. And then Weeds Social Club was born.

Mytopia are the developers behind this incredibly alternative social game, and all sides have a strong investment in the project. It allows club members to buy, sell and grow their product with other club members around the world. There’s a time-clock system similar to the ever-popular Farmville and the whole point of the game is to make as much dough as possible.

Though the content of the game is illegal in most countries, it steers clear of condoning usage of marijuana, pretty much just leaving it as a popular and expensive product that you are trying to move. The game is free and heavily dependent on the social aspect of Facebook, which ties in well with the drug dealing dynamic. It loosely follows the TV show with some of the lead characters making appearances or the risks and rewards faced in the episodes reflected in the game.

For more information visit the Facebook page and see if you can become Weed King of the Neighbourhood. 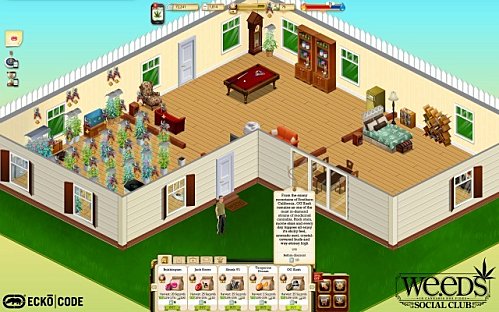