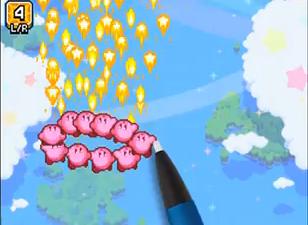 Kirby Mass Attack has been on my radar since it was announced, and so far the touchscreen styled platformer has been shaping up to be one of this years finest offerings on the Nintendo DS. If you have ever bought a portable Kirby game though since the GBA line, you should definitely expect mini-games to be thrown in as unlockable extras.

Nintendo released a new trailer today, showing off quite a few mini-games that will be able to be unlocked in Mass Attack. Normally we might see one or two, but this title actually features a large variety mini-games based on several types of genres. RPGs, Shmups, Pinball, and even whack a mole are all shown and are set to include several of the enemies from the series such as Mr. Shine and Mr Bright and the infamous Whispy Woods. Check out the new clip below and mark your calenders now, as Kirby Mass Attack launches on September 19th.