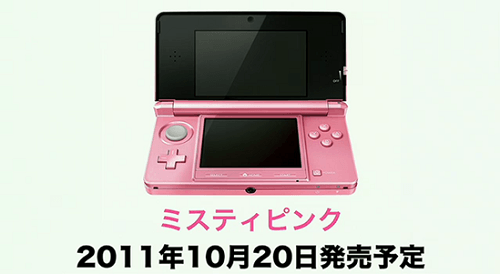 During an event held today pre-Tokyo Game Show, Nintendo has announced that they will be releasing a new color of the 3DS in an effort to push more of their newest handheld. However this one will be marketed towards the finer of genders, as the color is called Misty Pink.

The handheld will be released on October 20th in Japan but currently there is no news whether or not this color will be available in other countries outside of Japan. Still if you are looking to get your sister or girlfriend a present perhaps this Pink 3DS will make them take the jump from the normal DS. Or you know, if you are a guy who loves pink like Dustin. It’s cool.