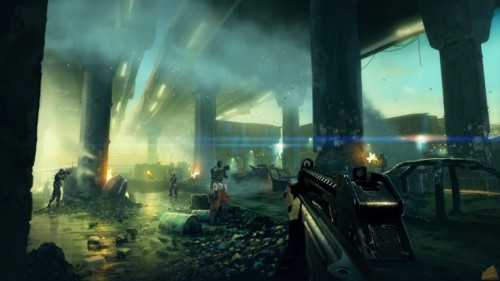 High octane shooter Bodycount has been released in Australia and New Zealand, battering it’s way on to shelves in an effort to take it’s place amongst the already packed FPS genre. Codemasters latest seems to be going for a light hearted approach, with the emphasis being on how fun it is to blow stuff up rather than any world/universe endangering crisis. Indeed the plot details stretch as far as “fight on behalf of The Network to bring down the mysterious ‘Target’.”

So it’s all about no nonsense, shoot ’em up fun – no bad thing! The release trailer isn’t exactly subtle about it, and shows off the overpowered weaponry, destructible environments and super intense gun battles. The main campaign is of course backed up with both a co-op and competitive multiplayer, where the destructible environments should add a nice element of strategy to taking down your foes.

Bodycount looks like a fun title, so it will be interesting to see if a new FPS can make a dent in the market. For more info on the game check out it’s offical Facebook page.