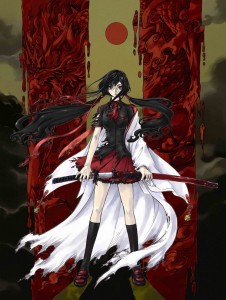 Following the series finale of the divisive Blood-C anime was a huge announcement regarding a movie follow-up. It has been confirmed that in June 22nd of 2012, a Blood-C film will premiere in cinemas across Japan.

The film is set to be a continuation and conclusion to the anime series. The film is a collaboration between legendary animation studio Production I.G and all female manga artist group CLAMP.

While the anime has recieved a “love it or hate it” reaction from viewers, the series was still popular enough to spawn a cinematic adaptation. Little else is known about the film as of now, however fans have already begun speculating on the plot and even the ending. Feel free to leave your own speculation in the shout box or comments section below.