Yesterday I had a chance to meet up with EA to check out both Battlefield 3 and Mass Effect 3. The Battlefield 3 demo had two stations to play through. I had a chance to go through a single player level and through a co-op level. Both demo’s I played on PS3. I’ll get the obvious out of the way first; Battlefield 3 is a beautiful game. If you’ve seen it in action then you know. Sure it looks absurd on PC but the frostbite 2 engine looks fantastic running on the PS3 hardware. If you’re not a hardcore PC gamer with a bajillion dollar setup you’ll do fine by playing the console version. The controls were tight and responsive and the game ran smoothly. The single player level was set at dusk and really showed off the lighting effects as you approach a city from the top of a hill. After lugging a mortar to the bottom and launching an illumination round into the sky, which happened automatically after a single press of a button, you’re prompted to hop a wall with a nice little in game cinematic as you’re hefted over. After some outdoor terrain and watching a guy run out of a building while on fire you promptly move into the interior spaces. The levels were laid out well with a very lived in feeling to them. While inside I picked up a shotgun that felt fantastic. The sound design should really be mentioned here, everything from the subtle score to the sounds of the guns, the atmosphere the audio created really did a lot and complimented the feeling of the game. After running through some corridors, the demo ends. It’s rather short and left me wanting more but it was effective in giving me an idea of how the game handles. The showcase here really was the feeling and atmosphere which Battlefield 3 came out with in spades. 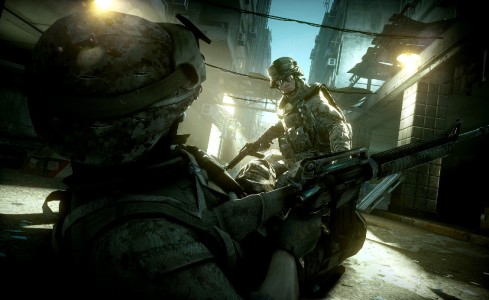 During the co-op session my partner and I were sent in the middle of the night to make our way through a nearby building to rescue a hostage. The first segment you’re instructed to do quietly so we creeped our way through with silencers as well as we could before inevitably getting noticed and quickly turning things into a “I’m shooting you in the face with a shotgun” scenario. Which to be honest, is more my speed anyway. Nothing like shooting someone in the face to really make you feel alive. After finding said hostage and escorting him to the transport, which is blissfully short. You’re then immediately thrust into an ambush with guys on roofs shooting and things exploding all around you. This is where the real meat was. As where the AI in the first segment of the level was a little slow and nothing more than fodder for you to shoot at, all of the enemies out on the street were expert marksmen vying for your cold and quick death. After cowering under cover for a bit and seeing it chip away my partner and I opted to try and draw some attention so we can pick people off. This didn’t work out as well as we would have like as my partner and I were dispatched rather quickly.

Lets cut to the chase here, you’re going to buy Battlefield 3. You’re reading this article to reaffirm that decision. DICE has put together something special with this game and everyone knows it. I know it, you know it, even your bus driver knows it. The single player campaign has a punch but you’re going to buy it for co-op and multiplayer, and Battlefield 3 does not disappoint. If any of those things are important to you then this is your game.