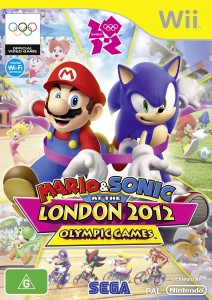 In less than a year, the London 2012 Olympic Games will be underway and Mario and Sonic are all set to compete.  The newest game from Sega that will celebrate these games will hit store shelves on November 15, 2011 for the Nintendo Wii.  The Nintendo 3DS version of the game will be releasing in February 2012.  For the Nintenod Wii, the packaging will have a unique yellow banner (see above).  The Wii version will have an enhanced 100m sprint race, and the Nintendo 3DS will have a new event: the 110m hurdles.  More events and new features are also being developed for the game.