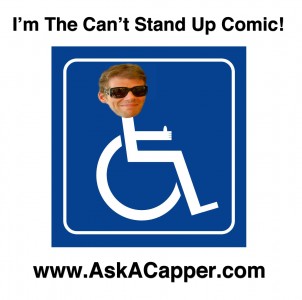 Chuck Bittner (also known as The Can’t Stand Up Comic, Ask-A-Capper and ONLYUSEmeFACE) is a Quadriplegic Gamer with a simple request: that game developers include custom button remapping as an option in video games. For disabled gamers like Bittner who can’t move the majority of his body, playing video games is on the most part impossible without the option of assigning which button does what. As a result, Bittner is forced to play games like Call of Duty: Modern Warfare 2 with his face, and he’s not alone. For a bit over a year now, Bittner has been running an online petition for handicapped gamers, as a plea to game developers to allow button remapping in video games, so they can find a way to play. At the time of writing this, the petition is currently over 75 thousand strong, but still aims to get a lot more signatures in order to make an important difference.

YOU can help gamers like Chuck by signing the petition here, or you can view his ‘can’t stand up’ comedy and asking him questions yourself at his website, www.askacapper.com, or follow him on Facebook, Twitter and Youtube. Chuck will also be appearing on the Capsule Computers Podcast next week, so if you have any questions you would like answered on the podcast, you can post them below or send them to podcast@capsulecomputers.com.