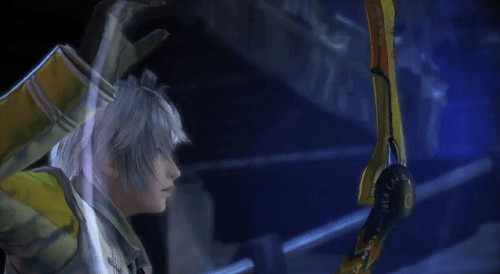 First let me tell you how difficult it is to catch a quick millisecond of footage and get a picture of it. But more on that in a minute. Square Enix released a new trailer for Final Fantasy XIII-2 today and in this trailer we see plenty of story cutscene, some combat gameplay and even some more of the cinematic actions that can occur during important storyline battles.

But now onto that screengrab above. Near the end of the video we see a boomerang fly out and deal damage to a creature and then be caught by a mysterious person. Though that person may not be as mysterious as the trailer would like, as the boomerang weapon not only looks nearly exactly like the one used by Hope in Final Fantasy XIII but also he has the same hair color, nearly same hairstyle and same type of clothing. Could this be a new more grown up Hope? We’ll know for sure when Final Fantasy XIII-2 arrives on the PS3 and 360 next January.