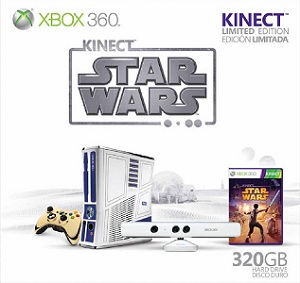 When can I throw my money at you!? Is what a lot of fans will be saying when they read this news from Comic-Con. Microsoft has revealed that they will be releasing a new special edition Xbox 360 Kinect bundle when they release Star Wars Kinect this Fall.

The Xbox 360 is a special R2D2 styled console that will have custom sounds built in instead of the normal ones we are used to, also it will be bundled with a golden C3P0 styled controller and an all-white Kinect to go along with it. Also it comes with Kinect, Kinect Adventures, and a 320GB hard drive. The price of the bundle will be $449, which is a small price to pay for amazing.