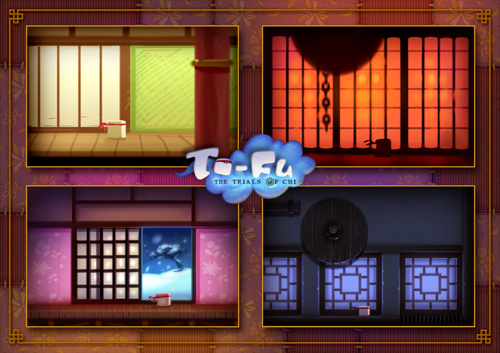 It’s no secret that we here at Capsule Computers love To-Fu: The Trails of Chi. HotGen has put themselves on the map as a serious developer to follow in the mobile games space and I was lucky enough to be able steal a few moments away from Mark Norman to get a few questions in.

ALEXIS AYALA: I’m a huge proponent of the return of “garage development” as you typically wind up with a more realised product considering you can focus on a singular vision with less cooks in the kitchen. To-Fu really has that feeling, so how many cooks are in your kitchen?

MARK NORMAN: We have a total of ten people at HotGen, although To-Fu’s team was only day to day consisting of about four people. The small team and tight ethics were what really helped shape To-Fu.
It was an idea that had been around since late last year, and something our designer and myself have been incrementally working on, conceptually, since that time. By the time it got to development we understood completely what it is we wanted to achieve, and from that day on we drove a straight line to the finish, with very little in the way of documentation or meetings, we just communicated well, managed ourselves accordingly and submerged ourselves into the character and the world we were trying to realise.

AA: To-Fu really feels like a labor of love, but I find it’s rare for a developer to say they had enough time to really bake it, how long did it take from start to completion? And do you feel your development time helped or hurt the final product?

MN: Development on To-Fu only took about 50 days from scratch (with the exception of some pre-conceptual work). We gave ourselves a maximum of 2 months, and this really helped us focus on what was important for the project and what wasn’t. We cut away a lot of fat at the beginning and throughout, we had to, otherwise its original scope may have taken closer to 3 or 4 months, so it was important to work out what the soul of the idea was, and how to just support that rather than get bogged down in a fuller narrative.
My personal opinion is that it certainly helped the final product, because it made us cut to the chase. That in itself was a terrific learning experience, because it’s one thing working for a 3rd party and being given a tight time-frame, but when it’s your own idea, your own character and your own design, being ruthless with it’s scope and all the niceties that it could have, is a lot harder in my opinion. Ultimately though, your creation is governed by how long it has to grow. This made us make a lot of early choices to omit or curb elements of To-Fu that turned out to be very much for the good of the game, choices that looking back on now, have no unhealthy impact on the final adventure.

AA: Any interesting hiccups you hit while developing? MN: To be honest with you, at the risk of sounding pompous, To-Fu’s development was pretty much a breeze. We knew what we wanted to achieve from the offset from the look of it right down to the feel and design. Having a clear concise goal is essential, and as long as you head straight for that goal, then you can solve any obstacles that present themselves with greater efficiency.
Our only real sticking point at the start was how he would animate, and how we as the player would interact with him.  It was paramount getting his flick mechanic to feel  fun, intuitive, addictive and like a genuine extension of your actions , so the methods we used had to be sympathetic to these requirements. Although when all is said and done, you can’t beat having a hot coder to make all your wacky ideas and methods a reality. Thankfully, ours was a ‘can do’ kinda chap, and we solved these issues very early on, so a massive curtsy to him for that!

AA: How close was the final product of To-Fu from the original inception? Was there anything on the cutting room floor that you really wished you got in there?

MN: Well, as far as the bare bones of the game’s feel and design go, then no not really. The main areas where we cut back were graphic variety and narrative. But then if you read those two words and then apply them to a 2 month deadline for a game with 100 levels, then they’re two very strong contenders for places to reign back and minimise risks of short changing the player.
We originally had 5 unique environments for To-Fu, then that dropped to 3, but I made a call quite early on after gauging our progress over time spent, and it was a no brainer to lose all but 1 of them, but try and make the one we did keep, one of variety.
Essentially I had to ask myself: Are people still going to enjoy playing the game? Personally, my answer to that was ‘Yes’, as the aesthetics are only there, in our case, to create a mood and backdrop to the gameplay. Both of these we were able to retain.
As for the narrative, well, there ‘is’ a story, there ‘is’ an antagonist, and both of these would have been a prominent overtone for the game had they gone in. As it is, for now, we’ve left a few suggestions in there that To-Fu himself has a larger arc to his story than the one we see currently. That’s all I’ll say for now. Haha.

AA: To-Fu is a game with no enemies, only obstacles. Do you feel that this was freeing or constricting while you were designing the game?

MN: To be honest, the decision to dispense with enemies was an early one. As unusual as it is, we didn’t feel that is was going to add anything to the overall design of the game at this stage. To-Fu has always been seen more as a action/puzzler type affair, so we wanted to keep the focus on what was important to making it engaging, and utilising our time to make sure those things were nice and tight in the final game.
I think enemies would’ve detracted from the the overall in this early episode of our character.
Enemies were spoken about, right around the time we found out we had 2 months to make the game, so an early culling of such suggestions was prevalent. AA: To-Fu is a remarkably well realised character with lots of personality, especially for something with such a minimalistic design. How long did it take for you finalise the character design?

MN: About 20 seconds Haha. I think the story goes, and he’ll correct me if I’m wrong; but our designer and I were walking through the car park after work one night and he was telling me about this idea he had for a touch screen mechanic. He described the ‘kind’ of character we’d need and I, wanting it to be something different, suggested To-Fu (not that tofu is stretchy, and Stuart, please write in to these good people if that story is inaccurate!). Anyway, the following day we went for a brainstorm and I grabbed a marker and drew the character in my head on the white board, and next to him I wrote To-Fu (as in Kung-Fu, sorry for explaining) and that was it, our martial artist was born.

AA: Why tofu? Do you have something against meat products?

MN: No no, on the contrary our next game we’re calling Meaty-Man’s Beefy Adventure. I don’t believe that’s been done yet… Probably. – ‘That’s a joke by the way!’

AA: There are a lot of people out there that compared To-Fu to Super Meat Boy. Was this intentional?

MN: Haha, great timing, I didn’t see this question coming at all. If I’m honest, then for me those are just lazy comparisons. I mean, other than the character being small and square (edible?), I’d find it very hard to identify any further similarities between the two games. If people were only talking about the characters then that’s one thing, but the games couldn’t be any more different. And our guy doesn’t have limbs!

AA: To-Fu’s fling mechanic really makes the game and is perfectly married to the character and level design. So what came first, the mechanic or the game concept?

MN: The mechanic, hands down. The bottom line to discovering new ideas and possibilities for games on touch screen devices is the mechanic. Is it fun? Is it addictive? Has it been done before? For me, if you have a great mechanic then everything else just falls in to place.

AA: Why did you decide to develop for iOS?

MN: Simple. This game wouldn’t work on any other format. The touch screen is paramount for controlling To-Fu.

AA: Can you tell me a little about developing for mobile and what you like about it?

MN: Well, I didn’t personally treat it much differently to other games I’ve worked on in the past. Mobile has advanced to the point now where the line is starting to blur between this format and dedicated games units, as is the way you develop for them.
As with any project you want to find out what your limitations are early on, and the confines you are to create within. Then you just accommodate and go for it. The principle is still the same.
I just like that you can go to anybody who has an iPhone, whether it’s a house party, a bar, on the move, and in under a minute they’re playing your game. It’s very gratifying, and convenient simplicity at its best.

MN: To-Fu has unfinished business, so who knows what’s round the next corner for him. As for HotGen, I believe it’s all hands on deck for Meaty-Man’s Beefy Adventure. Watch this space people!
Let’s have a big hand for Alexis Everyone!

So I think it’s safe to say that HotGen made a lot of really smart decisions during development and we’re all very excited to see what they have in store for us next. I for one, will be anxiously awaiting Meaty-Man’s Beefy Adventure and will certainly be on the lookout for the further adventures of To-Fu, that little cube of bean curd has stolen my heart.

For the keen arcade players, here is Asteroids: Gunner