Awesomenauts is a platform/side-scrolling shoot em’ up inspired by those Saturday-morning cartoons from the 80′s for the Playstation Network and Xbox Live Arcade from dtp entertainment AG and Ronimo Games. The game debuted at E3, and you can watch the trailer here. Oh yeah, and its gonna have one hell of a soundtrack! Today the first playable character has been announced: Froggy G. Froggy is a gangsta pimp, who just so happens to be a frog. What caught my attention is his humorous bio which will make any lover of hip-hop laugh. So who is Forggy G? This is all you need to know:

The amphibious B.I.G., also known as Nate Frogg or Froggy G, comes straight out of the marsh pond ghetto’s of planet Ribit IV. Growing up in the baddest part of town, struggle and incarceration surrounded Froggy from an early age. Taking part in his first swim-by shoot out as a tadpole, Froggy seemed destined for a life of crime and prison. After a bloody gang war with the neighbouring Toad-unit posse ended in a 5 year jail sentence, Froggy G vowed to end his gangsta ways. Instead, Froggy G started earning his keep as a beatboxing street dancer and rapper, hoping to be picked up by a major record label. Unfortunately, his tracks, titled “Pond Pimpin’”, “Froggin’ dirty” and “Motherfrogger bounce!” didn’t earn him much. In order to make some money, and then make some mo’, Froggy G became a hired gun. Combining his shoot-out experiences with lethal watery dance-moves and beatboxing techniques, Froggy G now spins and dashes across intergalactic battlefields.

Along with this, a trailer introducing the character has been released as well, with Froggy yelling catch phrases such as “Grandmaster Splash in tha house!”, “Can’t Touch This!” and “Pimpin!” With additional Awesomenauts will be revealed in new episodes of the Awesomenauts Spotlight within the next few weeks, its pretty safe to say that Awesomenauts is shaping up to be quite an Awesome game! 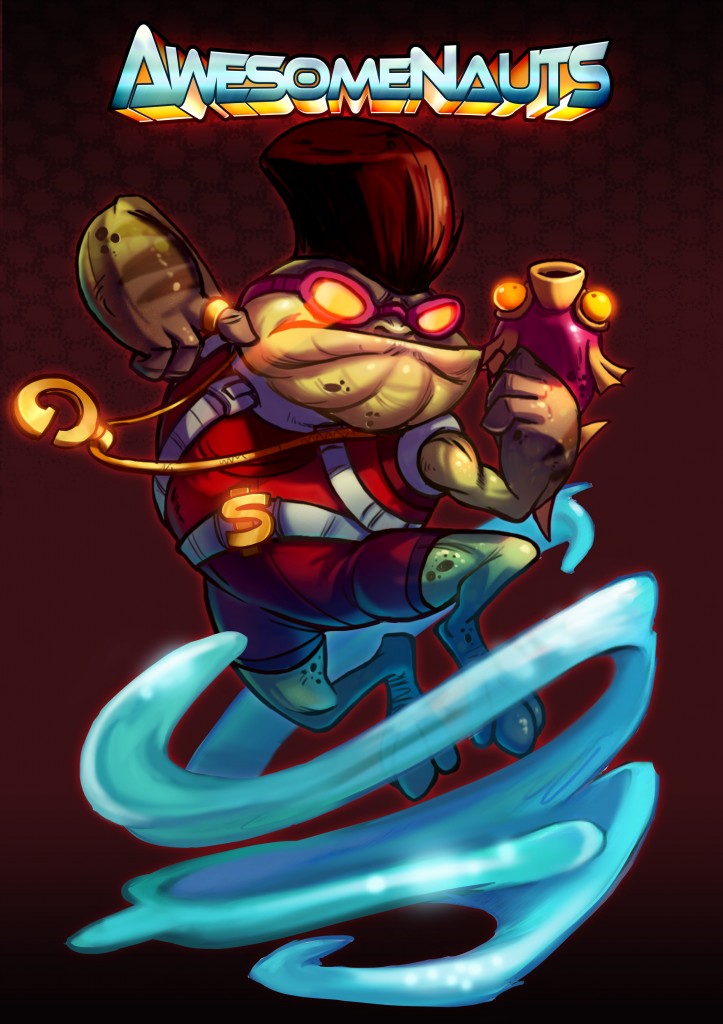