After stopping in and seeing XCOM in action I was ushered over into The Darkness II presentation room where we were introduced to the game by project director Sheldon Carter. He told us that The Darkness II will be the continuation of the story two years after the events that occurred in The Darkness I. After obtaining revenge for the killing of Jenny Jackie had been managing to suppress the Darkness for two years, that is of course until he was tricked into using it by a member of the Brotherhood. 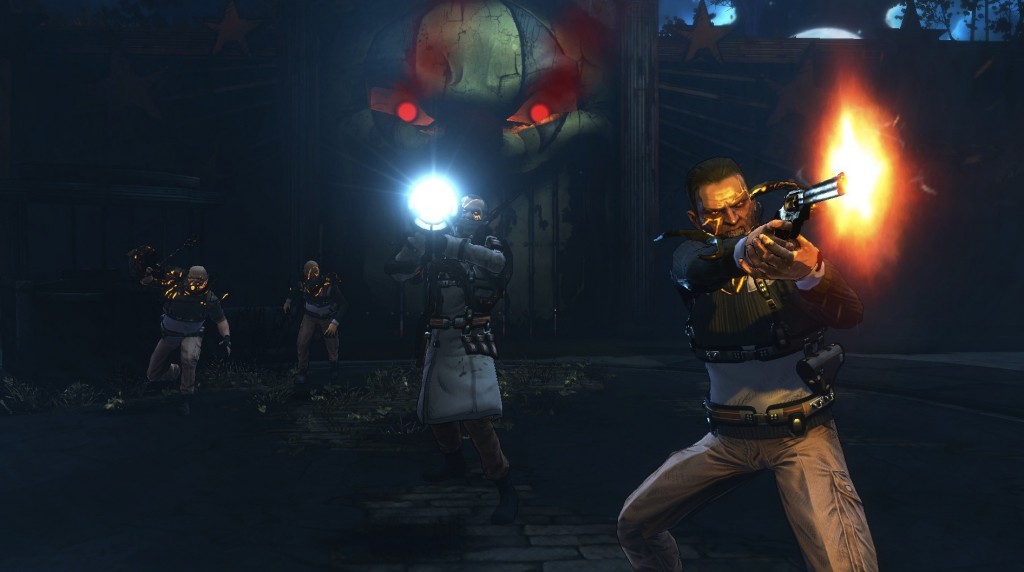 We join Jackie at an abandoned carnival, though unfortunately it isn’t as abandoned as we may hope as we soon come across the first Brotherhood enemy in the game. The Brotherhood know of the Darkness’ weakness to light and they find every opportunity to prevent Jackie from using the Darkness to his advantage. Some Brotherhood members will be able to throw out flash bang grenades which not only temporarily stun Jackie but also force the Darkness to retreat inside of Jackie’s body, leaving him vulnerable. Other members of the Brotherhood will carry around light cannons that constantly shine light on Jackie until he either manages to shoot the light out or kill the enemy holding it.

Many of the game’s previous combat mechanics return with Jackie being able to use two guns at the same time and eat the hearts of defeated enemies but there are a few new additions to the combat. First the Darkness can pick up pieces of the environment to serve as a shield of sorts against the bullets being fired at Jackie as well as throw items in the environment to kill these enemies. Every time an enemy is killed the player will be rewarded with points that can be spent on the new “Talent Shrines” that allow Jackie to learn new Darkness abilities.

The main skill shown off was the Gun Channeling skill tree which imbues the guns that Jackie is wielding with Darkness power that can let Jackie not only see enemies through walls but also shoot them through the walls as well. Jackie also has the ability to grab enemies with the Darkness and either perform an execution kill on them or throw them if they so desire. Just remember to go back and eat their hearts!

We were told by Sheldon Carter that The Darkness II will have hand painted textures which will help provide a graphic novel type feel and I could notice that the game certainly had that feel. Once we had seen the end of the demonstration, the demo went to black before displaying what appeared to be Jackie waking up in a psycho ward in hospital and a doctor telling him that he will be able to help him. Certainly a cliff hanger ending which I can’t wait to learn more about when the game releases this October for the PlayStation 3, PC and Xbox 360.