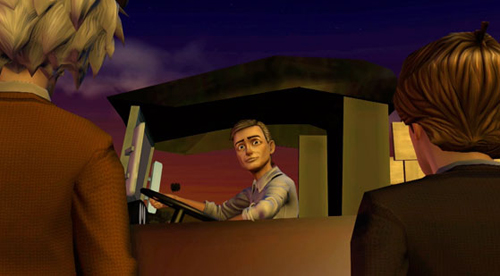 Telltale Games, everyone’s favorite go-to developer for adventure titles is celebrating it’s 7th anniversary with a bang. Running until June 30, you can get a whopping 75% off of almost everything! That includes games and merchandise so head over show Telltale some love. Because they love you.

Also,on June 23 you’ll be able to get your hands on the final episode of Back to the Future: The Game on PC and Mac, and will feature a very special appearance by none other than Michal J. Fox.
Michael J. Fox, the actor that played the legendary role of Marty McFly in the Back to the Future films, voices two characters in Episode 5 – OUTATIME but we’re only spilling the beans on one of them before the game launches later this month. Fox plays a McFly ancestor that Marty’s had a run-in with before – any guesses on who else he lends his voice to?

If you haven’t tried Back to the Future: The Game yet, now is the perfect time. Until June 23, the full PC/Mac version of the game is discounted to only $19.99, and on the iPad you can get episode 1 for free!

And to further show their love an appreciation, if you pre-order Puzzle Agent 2, Telltale will give you the game for 10% off the regular price and you’ll receive a copy of the original Puzzle Agent for free! Telltale is also giving you a chance at early access to the upcoming Puzzle Agent 2, releasing on June 30. All you have to do is pre-order Puzzle Agent 2 and create the funniest comic you can by using their provided screenshots. The deadline is 2:oo pm (Pacific) on June 10, 2011 and only five individuals will win. Telltale will announce the winners on their blog on Jun 13, 2011 and post the winning entries. Winners will have a download link for Puzzle Agent 2 added to their Telltale Games account shortly afterwards, about two weeks before Puzzle Agent 2 launches! Get all the details on the contest at the Telltale Games Blog.