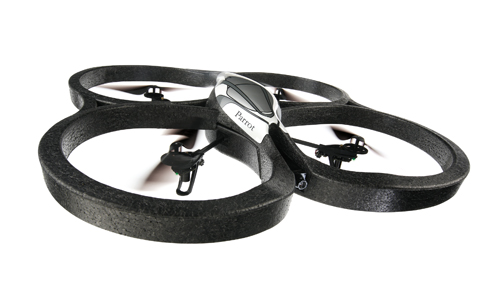 Parrot, leaders in creating awesome flying things that you know you want, have taken the video gaming world by storm by creating the AR.Drone, the worlds first flying object in Augmented Reality, piloted through Wi-Fi. Today Parrot takes things up a notch by announcing that not only can you pilot the AR.Drone with iOS devices, but now you can also use Android, bada (Samsung) and Symbian (Nokia).

Android users will will find a free version of AR.FreeFlight’s pilot application by Parrot in July 2011 in the Android Market. At the same time, Playsoft Games – for Samsung – and Nokia used the Parrot AR.Drone Software Development Kit to develop “Free Flight” (bada) and “AR.Drone” (Symbian) piloting apps. The SDK’s allow new developers to create new applications for the AR.Drone across iOS, Android, bada or Symbian platforms.

More Games: Challenge your piloting skills on your own customised circuits: zigzag your way through trees, inflatable pylons and donuts and race against the clock with AR.Race, a free customisable single or multi-player racing game for the AR.Drone. There will be more surprises to add to the growing catalogue of games for the AR.Drone soon.

And still to come, Parrot will launch a brand new game involving two players and a single AR.Drone.

More Interactions: A confrontation between the man and the machine, a track race where the target is not necessarily the one that we believe …Who will be the number 1 AR.Drone pilot in 2011? Parrot has set up the AR.Drone Challenges, an international competition (18 and over to apply) that will take place from June 24th till August 14th 2011 and will consist of three challenges for a chance to compete in the grand final in Paris in October 2011.

After registering at ardrone.com, participants will be invited to compete with others in three “video” challenges, revealed online on June 24th, July 8th and July 22nd. Pilots will have to film their exploits and post their videos on the website before August 14th, 2011. The top 14 will win a place for the grand international final, on October 1st 2011 in Paris.

Calendar of the AR.Drone Challenges: