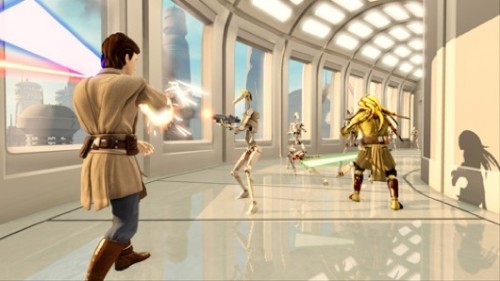 Kinect Stars Wars has been in production for quite some time as it was announced during last year’s E3. Fast forward to today though and new details have emerged to give us a better glimpse of what is to come for the anticipated Kinect title thanks to Entertainment Weekly. Kinect Star Wars is set to include several different modes set in the vast Star Wars Universe. “Jedi Destiny” mode will hold the plot for this new title, putting players in the shoes of one of several new characters to be introduced throughout the game with all sorts of references to the films in tow. As for a timeframe, Jedi Destiny is set to take place right after the events in The Phantom Menace and will conclude during the era of Episode III.

Of course the gimmick behind this title is the Kinect controls, which will utilize the device to enable the player to swing or toss lightsabers, steer a pod-racer, fly an X-Wing and defend themselves from enemy fire. Along with all the details also comes a new trailer showing the game in action. Judging from the clip, everything looks to be clean and simplified as far as visuals go, but the idea of mowing through droids with movements is still an awesome one. Kinect Star Wars is scheduled for a “Winter” release. While you patiently wait for that date to arrive, check out the new trailer for Kinect Star Wars below and Microsoft should have even more information during their conference which takes place later today. Stay Tuned!