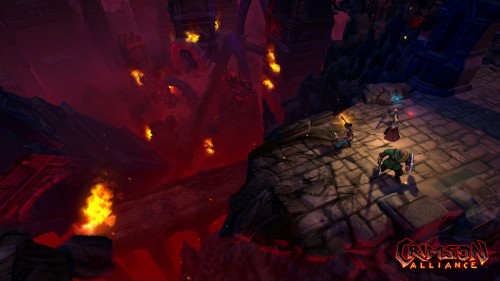 Certain Affinity announced today that they are working on a new title for the Xbox Live Arcade. It will be called Crimson Alliance and is set for a release date some time in the Summer. The title will mix co-operative combat into an RPG setting against the Cult of the Soul Siren. Players will be able to play with three friends over Xbox Live and chain their attacks together for devastating effects.

Players will be able to select three different classes to play as; Assassin’s that can bend time to their will, Wizards who have mastery over the elements and of course a Mercenary handling all of the sword swinging work. These character classes can then be leveled up by collecting treasures and finding something called Soul Anchors that hold the spirits of dead heroes.

Max Hoberman, Certain Affinity’s president, had the following to say about Crimson Alliance,”One of the reasons I started Certain Affinity was because I wanted to make a game like this – an action RPG with clever AI, fantastic physics and deep emergent gameplay that can be enjoyed with friends in the living room or halfway across the globe. Crimson Alliance is that game, finally!”

He also told his developers that they should look at how FPS games handle action and character progression and apply it all to the RPG genre they are working on. I’m not sure how you can take character progression from a first person shooter but okay. The game itself will be playable at E3 next week and will be published by Microsoft this Summer.