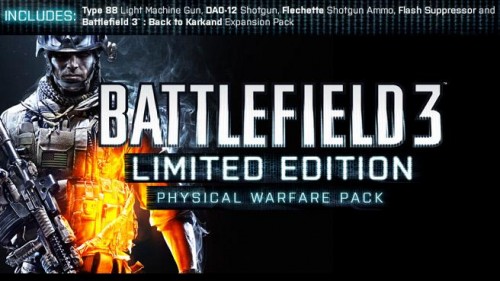 The Battlefield 3 Limited Edition: Physical Warfare Pack is now available for pre-order exclusively at EB games in Australian and New Zealand. This limited edition version of the game includes both, exclusive and early access to weapons and items including the Type 88 light machine gun, the SKS sniper rifle flash suppressor, the versatile DAO-12 semi-automatic shotgun and armor-piercing flechette ammo.

Also included in this pack, is a collectible Battlefield 3 Steelbook and the Battlefield 3 Back to Karkand map pack which includes four remastered classic maps from Battlefield 2, which include Strike at Karkand, Gulf of Oman and the Sharqi Peninsula. As well as this, players will also receive access to SPECACT Kit and five unique Dog tags to customise their in-game avatar. All this content will be available at no extra charge for players that pre-order Battlefield 3 Limited Edition: Physical Warfare Pack.

Battlefield 3 will be available for Xbox 360, Playstation 3 and PC on October 27th