Tzai Entertainment has announced today that SHMUSICUP, their rhythm driven shoot ’em up, is now available for download onto PCs. While the game is still in its beta release, there are several enhancements that this downloadable version includes over its browser-based counterpart. First of all, the game now supports tons of file types instead of only MP3. In case you aren’t familiar with the game, SHMUSICUP is a bullet hell shooter where players import their own songs as the soundtrack, and the boss’s bullet patterns will be based on individual songs. In addition to MP3’s the improved SHMUSICUP now accepts AAC, m4a, MP4, and FLV. The game can now also be played in full screen mode and with support for controllers for gamers who have an aversion to keyboards. 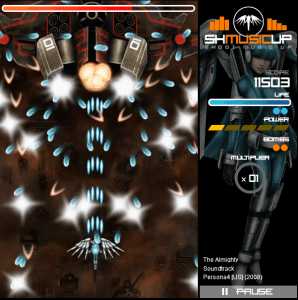 One of the biggest improvements Tzai has included in the new-and-improved version of SHMUSICUP addresses one of the main concerns from our review of the game. Previously, bosses would die as soon as the song ended, no sooner and no later. This means that no matter what, skilled players couldn’t down the boss early and unskilled players couldn’t fail. Now it seems that if the song ends while the boss is still alive, the player loses any score bonuses that would normally be awarded. The game also rewards players who are able to kill the boss prior to the end of the song by sending it into an overdrive mode which drastically increases point values. On top of that, bosses also now appear to have varying hit boxes depending on what part of the body at which you are shooting. These things increase both the challenge and the strategy involved in achieving a high score.

Because of its beta status, SHMUSICUP is still in the pre-order stages of availability, with a pre-order scoring players access to all six stages. Players who purchase the game prior to its full release will also get it at a discount, paying only $9.99 instead of $14.99. If you’re interested in trying it out, SHMUSICUP can be downloaded here or you can try to in-browser version.

Game Developers in Australia get support from Government