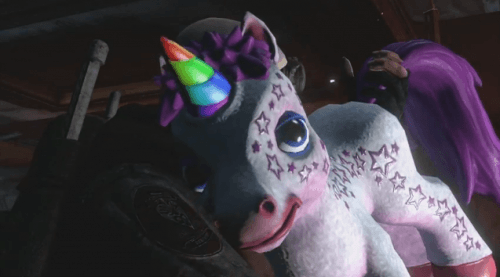 No you actually read that right. But first let me address the fact that the Red Faction: Armageddon demo has went live today on the Xbox Live. Unfortunately the planned release for the PlayStation 3 demo didn’t happen because well… THQ can’t control the PSN. Either way, fans of Red Faction will be able to get their taste of destruction with the magnet gun allowing them to demolish buildings, form worm holes in the ground and destroy everything in site.

Now if the demo is downloaded one million times then a cute little addition will be given to everyone who downloaded the demo. That bonus will be a unicorn that shoots rainbows out of his butt and can cause a lot of pain to his enemies. Though it seems that he isn’t very happy being used as a weapon either as you can see below. Fans will be able to access the full game when it releases in stores on June 7th for the PS3, Xbox 360 and PC.

Leap and Platform Next are Microsoft’s newest studios