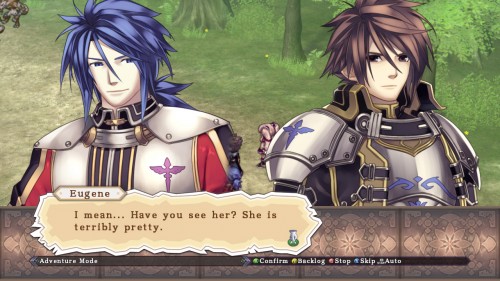 This time around fans of the first game won’t be disappointed as the ESRB has found the title worthy of a T rating but nothing more. The ESRB finds that the game will have plenty of sexual innuendo and boob jokes as well as skimpy outfits. Also don’t forget about the hot springs that can be visited upon meeting certain requirements in game. You can catch the full ESRB summary below and catch Record of Agarest War Zero in stores on June 14th for the PS3 and Xbox 360.

This is a fantasy role-playing game in which players control a hero and his troops through a span of two generations. Players explore towns, travel along map points, and fight humans and creatures in turn-based battle. Combat consists of small characters standing in place as players select weapons and attacks (Trick Hit, Black Mist, Shadow Burn, etc.) from a menu screen; damage is indicated by various slashing sounds, light effects, and floating hit points rising above characters’ heads.

The game depicts several female characters whose breasts/buttocks are partially obscured by towels, hot-spring mist, blankets, and skimpy costumes. These still-frame images also depict female characters holding each other provocatively or engaging in suggestive/sexual dialogue (e.g., ‘I’ll teach you how to please a man’ and ‘[W]hy are you touching me?!’/’Not . . . there . . . Ooooohhh! Please, go easy on me!’).

In one extended sequence, female characters in a hot spring compare each others’ bust sizes (e.g.,’She is a grown woman now,’ ‘Such courage, to so brazenly flout the laws of gravity’ and ‘Yours are just as large, Mimel!’). During the course of the game, characters make several references to alcohol (e.g., ‘She shall make an excellent drinking partner,’ ‘We might drink hot buttered rum,’ and ‘Barkeep, bring us some more fresh ale!’). Language such as ‘bastard’ and ‘damn’ can be heard in dialogue.

Bowl with some anime-like characters in Aksys’ Crazy Strike Bowling