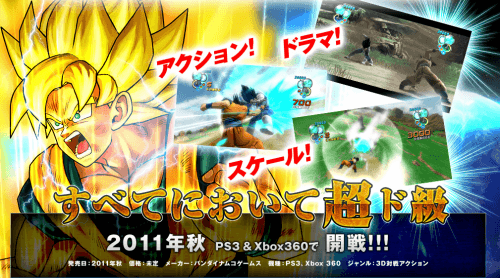 Last week Namco Bandai of Japan had some information leaked out that they were working on something called Dragon Ball Game Project Age 2011. Now it has become official as they have opened up a teaser website for the hopefully soon to be renamed game. You can view the website here but as the writing itself is in Japanese there isn’t much to see.

The translation from what is on the website shows that the game will promise to deliver action drama and scale the likes we have yet to see from a Dragon Ball game. Also it promises to be the most realistic Dragon Ball title ever aiming to make players feel like they have truly become the character they are playing. Now with a Fall release in Japan it will be very interesting to see how exactly they plan on making the Dragon Ball franchise realistic and as immersive as they are teasing.