With the recent release of Nintendo’s 3DS, and all of the excitement and hype (mixed with some disappointment) surrounding it, the subject of today’s post seems very fitting. It almost seems like the Guardians wanted things to fall into place the way they did. Or maybe I’m just looking to much into things.

As you can plainly read in the title, this time out of the proverbial hat I drew a game for the ill-fated Virtual Boy. Most people probably wouldn’t be happy about that, but I was perfectly ok with it for two reasons. First of all, I’ve always kind of liked the Virtual Boy. I first rented it from a Blockbuster back in 1995 and had a good run with Wario Land. Sure it was awkward to use at times, but I love Wario Land and I think the system has some real charm to it. The second reason is that I only own 4 games for the thing. Seeing as how I have no interest in collecting the entire library (can you really call it a library with less than 2 dozen games?), I’ve only got the few games I like and would want to play. Therefore, I knew there couldn’t be anything disastrous about this one. 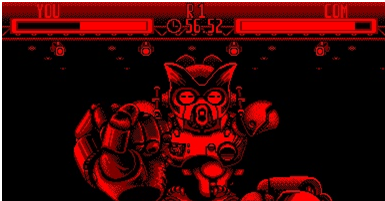 This is still what comes to mind when I think of virtual reality.

The random game I was all set to play on my prototype 3DS was Teleroboxer, an interesting little title that is essentially Rock ‘em Sock ‘em Robots in first-person black and red 3D. Not only have I absolutely loved Rock ‘em Sock ‘em Robots since the days when I still wasted my time with games that weren’t electronic, but Teleroboxer is the only game I can think of off the top of my head that is controlled with two D-pads. I hadn’t played it previously because ever since I bought a Virtual Boy a couple years ago Wario Land hasn’t been removed from its cartridge slot, but I was looking forward to it.

Remember how I said I knew there couldn’t be any disastrous consequences with my Virtual Boy games since I liked them all? Well unfortunately fate makes fools of us all, and it turns out that the Virtual Boy wasn’t going to let me get away scot free. I started by getting everything set up: dusting a thin layer of dust off of this monstrous “portable” system, hooking up the AC adapter so I wouldn’t need batteries, switching cartridges, and finding a sitting position that would enable me to look into the eye-pieces with contorting too much. 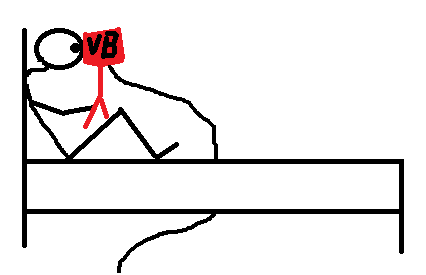 Try holding this brontosaurus pose for more than a few minutes.

As I power on the Virtual Boy, it gives me it’s usual health and safety warning (which on the Virtual Boy comes across as more of a slap in the face than a warning), the VB logo, and then Teleroboxer title screen. Oh boy, here we go. I wish I could capture an image of what exactly it looks like, because no amount of description can really do it justice. It’s not that Teleroboxer is an ugly game, but for some reason, the screen was so ridiculously garbled that it looked like I was staring at a screen of code from the Matrix, although in red. I could still make out the title for the most part. I thought, “Well, maybe I can still play and it will just look kind of glitchy”. I told you the Virtual Boy wasn’t going to make this easy on me.

From the title screen it brought me to what looked like some kind of instructions I suppose. It showed a diagram of someone punching, and some lines, and that’s about all I could make out through the distortion (the picture is somewhere below). At this point I was trying to figure out what the problem was, and as I peered through each eye-piece individually I noticed that the left was far worse than the right. A brilliant idea came to mind: just use the right eye-piece! It might ruin the 3D effects but at least I’ll be able to play it. So that’s exactly what I did, and at first it seemed to be working. While the left eye-piece just showed a scrambled grid of solid red, the right showed a pretty clear picture as I navigated through the save file menu and selected my first opponent.

After all of that trouble I was finally into the game. The Virtual Boy had tried to keep me from playing my 3D Rock ‘em Sock ‘em Robots, perhaps even tried to keep me from writing this post. With perseverance, however, I had outsmarted the machine, which as I look at now it more and more reminds me of Wall-E’s head on a pike. Is that morbid? Anyway, I was in and it was time to start the game, or so I thought. At first it wasn’t so bad, I thought. I could really only make out the left half of the screen (possibly having something to do with the stereoscopics of the Virtual Boy and the busted left eye-piece) but I thought, well maybe I can work with this. It’s just robot boxing after all. 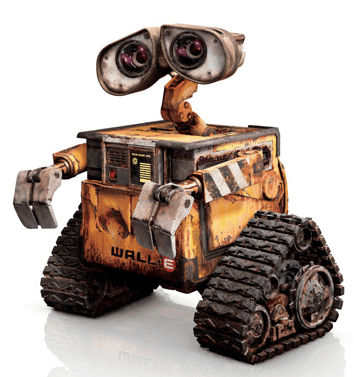 Imagine this little guy after a run-in with Caligula.

So far, I’d say things haven’t quite gone according to plan. I’m sitting hunched over on my bed balancing a pair of red goggles on my legs, craning my neck to see into it, squinting my left eye and straining my right eye to gaze into the eye-piece, looking at a garbled, unintelligible screen with half of a robot opponent’s body sort of visible. Yet I persevere, attempting to block and throw punches using the two D-pads. I may not have been the best at Punch Out, but I was at least decent. Let me tell you though, I don’t think I landed even a single punch. Meanwhile, even while blocking (I think I was blocking, it’s hard to tell what’s going on with less than half of a screen) my mechanical opponent was steadily dropping my health bar.

As I’m sure you can imagine, I’m not able to play Teleroboxer on my Virtual Boy. I suppose 15 years is all of the life this little bipedal headset is getting, but that doesn’t mean that I’m giving up. That would be too easy. My first thought was to simply borrow a Virtual Boy from someone so that I could play Teleroboxer and do this thing right. It was at this point that I realized that I don’t have any friends who own a Virtual Boy, a side effect of the system’s obscurity and low esteem. 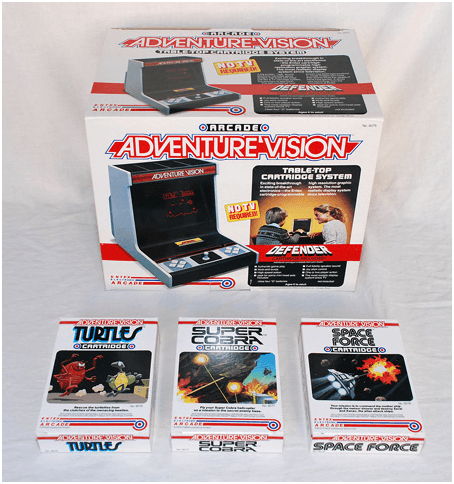 Talk about oscure. The Adventure Vision, released in 1982, used basically the same technology as the Virtual Boy and had only 4 games.

Next I decided to try emulation. As much as I would prefer playing it on a real system with 3D effects and a controller in hand, I’m sort of down to last resorts here. I wasn’t even sure if there were any Virtual Boy emulators floating around. I mean, I know that there is pretty much an emulator for everything, but the Virtual Boy is just such a strange beast. It was pretty easy to find Red Dragon, an emulator suiting my needs, and the appropriate rom for Teleroboxer. Once I started everything up, I was greeted by the familiar screens, albeit with distorted colors, set the controls to keys I was comfortable with, and hit start.

Or at least I tried to hit start. At the title screen it clearly had written, “Press Start” right under the world Teleroboxer in huge letters, so I did. Then I hit it again. About a second later, the game went to the demo, and I watched as two robots punched each other’s lights out in super speed. So now I had two apparent problems on my hands: I couldn’t press start at the title screen, and the emulator was clearly running too fast. The first problem I solved quite easily. When the game instructed me to press start, what it really meant was to press the A button (although I don’t know why it couldn’t have just said “Press A”). As for the super speed, I decided to just live with it. 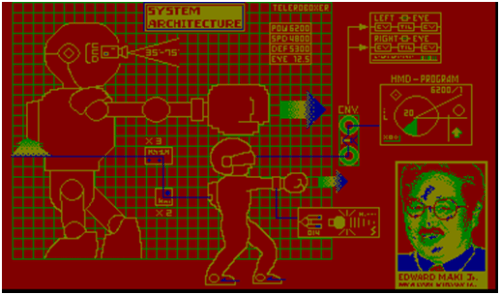 This is what the Terminator would see when watching Karate Kid.

Now would it really be as exciting if I was able to just play the game without any more issues? Of course not. This one however is an issue of a different variety. When it really comes down to it, I have absolutely no idea how to play Teleroboxer. I know you’re supposed to control your hands with the D-pads, with each one controlling the respective blocks and punches, but I can’t seem to land a single hit or successfully block anything. Within seconds I had fallen (it was only seconds because the game was running at about 2 or 3 times regular speed, but I was still a complete failure).

We’re coming up on 1,500 words that I’ve written now and I have still yet to discuss gameplay at all, mostly because I have yet to really play the game, but I hope that this has given at least a little insight into the difficulties one can encounter with retro gaming. Sometimes troubleshooting an older game is not as easy as just blowing in a cartridge. It can often take a lot of work, and in some cases a lot of money, to enjoy retro gaming as a hobby, and that’s part of the reason why I filled you in on how I encountered just about every problem that can arise in attempting to play a game, between faulty hardware, physical strain (ok, so that one is kind of specific to the Virtual Boy and Sonic Free Riders), imperfect emulation, and a lack of instructions.

I eventually found out that the reason I wasn’t landing any punches is because in order to control the game you need to use the L and R buttons in coordination with the D-pads, a point of which I was unaware. I discovered this thanks to a guide on GameFAQs.com written by BHodges (Thanks dude, but seriously? A Teleroboxer FAQ?). Without a controller, I’m pretty sure I lack the mental faculties to coordinate my fingers to manage 8 directional buttons and 2 shoulder buttons on a keyboard, so that’s not going to happen on an emulator.

Although I didn’t get to play Teleroboxer, and I probably won’t until I decide to replace my Virtual Boy, I think this was still a worthwhile experience. It definitely had its share of frustrations, but I suppose most people would have expected that from a Virtual Boy game. Perhaps I’ll revisit this one day when I find myself with working hardware, but for now I think this case is closed. I already know what the next game to be played is (I got a little antsy and rolled the dice while writing this) and I’ll give you a hint. It has a very close relation to my favorite Virtual Boy game. So I’ll see you all next time, when I’ll actually get to play a game!

Also, if you’d like to catch up on parts 1-4, you can find them at the links below: