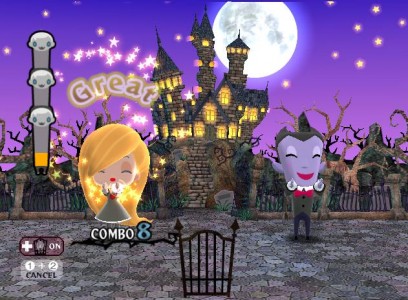 For those who don’t have a 3DS yet and wanting to get in on the newest Rhythm-action title from Natsume, you are in luck as the WiiWare version of Gabrielle’s Ghostly Groove, titled “Gabrielle’s Ghostly Groove: Monster Mix” is now scheduled to be out a while before the 3DS version drops as it now hits the download service on May 16th. This version is will still include the same gameplay and ghostly beats that the 3DS features as well as a ton of extra content that will be sure to keep players “groovin” with Gabrielle while they attempt to lure back zombies into Monster town.

“Gabrielle’s Ghostly Groove: Monster Mix is a fun-filled dance adventure unlike anything else you’ll find on WiiWare,” said Hiro Maekawa, President and CEO of Natsume. “With tons of unlockable content including outfits and items, and a multiplayer mode where up to four players can show off their best moves, it’ll have everyone in the room dancing!

I am digging this little rhythm title from what we have seen so far as it shows a lot of potential to grow as a series due to it’s originality. For those that do have a 3DS, this WiiWare version should be a perfect supplement while you await for the 3DS version to release later this summer. Check out the trailer for Monster Mix below and we will bring you even more on Gabrielle’s Ghostly Groove as both versions release.