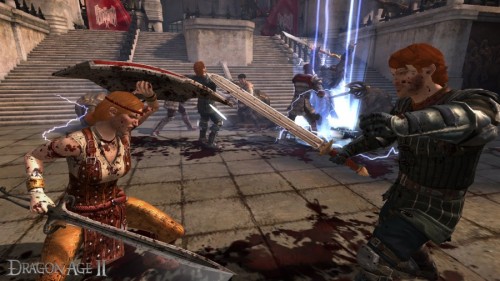 Today Bioware and Electronic Arts have released their latest patch for Dragon Age 2. They claim that there is over 100 fixes within the patch.

At launch, Dragon Age 2 was plagued with nonsense bugs and, well, the entire community complained. But now there are fixes! Juicy, Juicy fixes for everybody to enjoy. As you can probably tell, I’m quite excited by this latest patch! Woo-Hoo!!!!

Patch 1.02 includes over 100 major and minor fixes, including the following:

NOTE: Some plot fixes are retroactive, but not all. Players with plot-breaking
bugs may need to revert to an earlier save, particularly a save prior to
visiting the affected area during the current year in the game.

GAMEPLAY
– The effects of various follower talents and item properties are now being
properly removed and re-applied when loading and saving.
– Anders’s default set of tactics will now activate Haste when appropriate.
– Aveline’s final armor upgrade is now available during “Favor and Fault.”
– Aveline’s Retaliation talent no longer imposes a delay when activated.
– The warrior’s Rally talent now functions as described.
– The rogue’s Lacerate talent now functions as described.
– Party members who are resurrected during a fight now rejoin combat properly.
– Hawke no longer gains random spells or talents after using the Maker’s Sigh
potion, then saving and reloading.
– Potions, poisons, grenades, and runes can now still be ordered from the Hawke
estate after the main campaign is complete.
– Various minor gameplay issues no longer occur.

QUESTS (SPOILER WARNING)
– “Duty” will now appear on the Chanter’s Board even if the player accepted
all of the board’s quests before installing the Exiled Prince premium content.
– The journal for “Duty” will now update if the player left the Docks (Night)
area immediately after killing the Flint Company mercenaries.
– In “Finders Keepers,” the door to Woodrow’s Warehouse will now open if the
player steals the location to the warehouse from the harbormaster’s office.
– In “Finders Keepers,” if the player leaves Woodrow’s Warehouse before finding
the crate, it is now possible to return to the warehouse to complete the quest.
– In “Herbalist’s Tasks,” the varterral’s heart is now available even if
the player killed the varterral before receiving the quest.
– Merrill no longer refers to the aftermath of “A New Path” before the plot
has been completed.
– Varric is no longer confused about which character Hawke has been romancing.
– Various minor story-scripting issues no longer occur.

PC/MAC-SPECIFIC FUNCTIONALITY
– Varric’s Embellishment talent no longer incorrectly refers to movement speed.
– It is now easier to select party members by clicking on their portraits when
the level-up arrow is displayed.
– The game now functions correctly if the Windows desktop is set to 150% size.
– The video options menu now allows a wider full-screen gamma range.
– Various issues specific to DirectX 11 no longer occur.
– Various technical changes should improve performance and limit crashes.