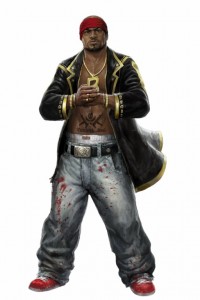 Dead Island looks to be a gritty zombie slaying game, and Deep Silver has now released some new info on a character called Sam B. His background, as described by Deep Silver, is below:

“A one-hit-wonder rap star of fading fame, Sam B was booked by the Royal Palms Resort Hotel to perform his well known song “Who do You Voodoo?” at a high profile hotel party. He gladly took the chance to play this gig.

Once strong, self-confident and proud, Sam B has had a troubled past and a history of drug and alcohol abuse, as his private life became caught in a haze of fake friends and bad advisors.

Trying to pick up the pieces and earn some extra cash, he suddenly finds himself surrounded by a whole lot of different problems…”