Do you have about 6 hours where you can leave your Xbox on and do absolutely nothing with it? Do you have a fast enough connection where losing about 6Mbps of speed wouldn’t affect your other computers that much? Do you unlimited data plans? Are you in the US and are going to say that you are over 18?  Then The Xbox Live Labs Want you!

If you are in the US the community section of the Xbox Live Dashboard now has a new tab that says “Xbox Live Labs”; Click this, Download it, and play it. Sadly, you won’t actually be playing anything because the app is essentially just acting as a network stress test and you just have to sit there and do nothing while it runs.

It will run non stop, but by leaving it running for 6 hours you will unlock 3 achievements worth absolutely no gamerscore, and get 4 science themed avatar awards (technically 3, because the lab coat has a mail and female variant.)

The downloadable app is available through March 27 for the US only, and it consists of a bunch of network tests, during which you won’t be able to run games, movies, or music. It is kind of like running a game and then staying in the main menu for 6 hours; You’ll just have to sit there for 6 hours and leave your Xbox running while it does the tests. I would suggest going outside… or turning on your PS3.

The tests are supposedly for improving the online service? But everyone is really only going to do it for the avatar awards which include a lab coat, brain helmet, or mad scientist hair.

As I stated earlier, you can find Xbox Live Labs in the community channel if you are located in the US. If anyone finds some workaround to get it in other locations please share.

~NOTE: I did a speed test before and after starting the app, and my download speed dropped about 3Mbps-6Mbps. I have a fast enough connection where it doesn’t actually slow me down that much, but some users may experience different speed drops and it may hinder your ability to use other devices on the internet.~ 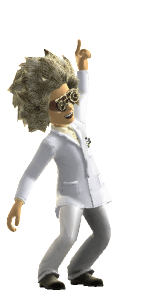