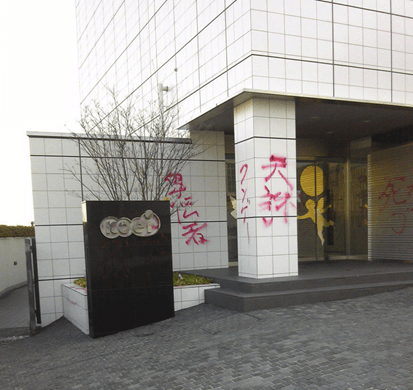 Tecmo-Koei has received a lot of hate from gamers over the years, which is usually due to putting out the same old Dynasty Warriors game ever year. Well someone really went out of their way to show it as their office in Yokohama was tagged by grafiti artist. They wrote such wonderful poetry as “die garbage”, “crap game”, and “Tenchu” to name a few.

Not for sure why they wrote Tenchu since Namco-Bandi has nothing to do with the series. Guess they really love Tenchu. There is no information on who the culprit is but this is just silly. What happened to just ranting and crying on the Internet?

Stay tuned we’ll have our review of Dynasty Warriors 7 in the next few days.  Keep an eye out for our live video gamplay stream as well.