And we’re back for our latest random game. When my random number generator landed on the original Playstation I got a little worried. I have some really great games on the PS1: Parappa the Rapper, Klonoa, and Oddworld to name a few. On the other hand, I also have some real garbage. So, we spin the wheel and the answer is Sentinel Returns, a 1998 title published by Psygnosis (the back of the case also lists No Name Games and Hookstone as the licenser and programmer respectively). Much like my first game, Solaris, I have no idea what to expect with this one. I picked it up used from my local video game story about a year ago mostly because it had the Psygnosis label and it has been sitting in a box ever since. 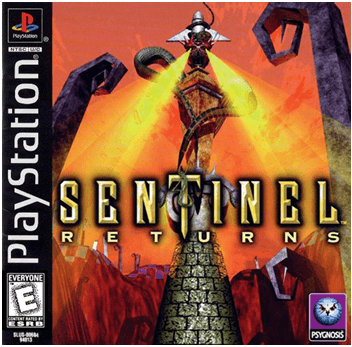 The interesting cover and Psygnosis logo prompted my purchase of Sentinel Returns.

The case certainly looks interesting enough, which is perhaps why I dropped ten bucks on a game I can hardly remember buying. The front cover features some sort of evil totem pole looking thing with laser eyes (I assume that’s the sentinel). The back describes it as eerie with “white-knuckle gameplay”, and apparently it’s based on Sentinel by Geoff Crammond. I’m not familiar with it, so that doesn’t really tell me much. From the looks of it, I’d guess that it’s some sort of puzzle game involving avoiding detection by this sentinel. I guess it’s time to start it up and find out.

My first thought upon watching the pre-menu cutscene is that you really don’t see this type of creepy, dark and dreary type of stuff in games anymore. The sort of eerie, gory imagery of games like Phantasmagoria or D is something that’s just not that common anymore. There are still horror games, but maybe this type of thing was just a relic of the 90s. Basically what we have is a collection of strange images flashing in an incoherent, seizure-inducing manner much like you’d see in metal music videos on MTV back in the 90’s when they still aired music videos. It sort of reminds me of a cheesy knock off of the X-Files, and I’m not sure if I mean that in a good way or a bad way yet.

I’m pretty sure I saw this exact logo flit across the screen for a frame or two, except it was about one-third this resolution.

Now that I can see they’re really trying to sell the fact that this game is supposed to be scary (or at least creepy), allow me to play it and see how that holds up…after the CD loads of course. At least I’m playing it on a PS2, so maybe I won’t have to wait so abysmally long.

I have absolutely zero idea as to what’s going on. From what I can gather, I’m in some sort of…field? Canyon? I don’t know. I’m somewhere. And there are tall silver…spikes? Look, I don’t know what anything is, alright? Just bear with me as I attempt to describe this. I have a targeting reticule which I can move with the D-pad. R1 seems to turn me 180 degrees around. L2 seems to change the reticule when held, although I have no idea for what purpose. R2…does something. I really don’t know what, but it looks like I’m using or losing something whenever I press it because an icon disappears from the bottom of the screen each time. The face buttons and analog sticks don’t seem to have a function whatsoever.

I know what I’ve written doesn’t make any sense, but that is exactly how I feel. Perhaps in my disjointed descriptions and lack of clarity I have instilled in you just a fraction of the confusion I’m feeling. There is also a very loud noise constantly playing that sounds kind of like steam rushing out of a pipe, and the music is decent enough but it’s a pretty short loop. I’m going to have to consult the manual again. 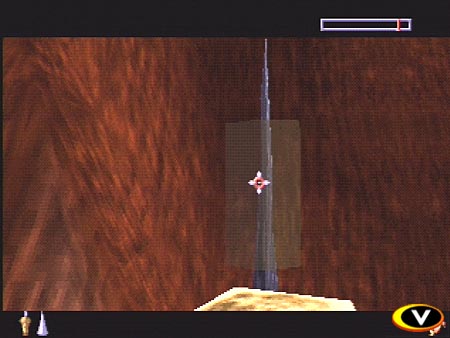 These are the spikes I was referring to. Stay tuned for the revelation of what they actually are!

It seems that even the instruction manual isn’t quite sure what’s going on. It talks about a substance of unknown origin which can be injected into a specimen of equally unknown origin, and apparently the consequences of failure are unknown. I’m glad I’m not the only one who doesn’t know anything.

It seems that the gameplay revolves around absorbing things in the environment in order to gather energy while avoiding detection by the sentinel. If he spots you, he’ll absorb your energy. The sentinel can also create sentries, which are mini versions of himself, and both the sentinel and sentries can create, I kid you not, “meanies”. These meanies can teleport you from where you are to a less advantageous spot on the map. The ultimate goal seems to be to gain enough energy and get to a spot from which you can absorb the sentinel itself. Or at least that’s what the manual says. I suppose I’ll restart the level and see if I can figure this out.

Surprisingly, knowing the rules does not really help all that much. I’ve managed to absorb a few “trees” (I put that in quotes because these trees are actually the huge silver spikes I mentioned earlier), and to warp back and forth between two equally useless locations before wasting all of my energy. I’m really just stumped. I think the real problem is that while the manual is quite verbose in describing what you’re supposed to do and how you’re supposed to do it, there are very few pictures.

Usually when describing a HUD or interface, a manual will have an image of it with captions and labels. I also think I’ve figured out that you need to create robots (apparently in this game robots are smaller totem poles) and you can move around by jumping from robot to robot. Unfortunately, I can’t figure out how to get to a higher vantage point because I only seem to be able to create robots at my level or lower. I would really hate to give up on this game without even being able to make sense of the first level, so perhaps now is time to head to the internet to see if it can be of help to me.

As always, YouTube has provided me with a bit of a clue as to how I should proceed. I don’t know why I hadn’t considered this before, but the answer is quite simple. Apparently apart from creating robots and trees (aka totems and spikes), you can also create boulders. Hey, what do you know, the boulders actually look somewhat like boulders! Anyway, you can stack a robot on top of a boulder to reach higher locations. Now that I’ve figured that out I’ve made a bit of progress in moving about and I’ve absorbed a few more trees. Unfortunately, once I got a few levels higher than where I started I saw my scan bar filling, which means the sentinel has spotted you and is about to either drain your energy or create a meany to warp you away.

Wait, where is the sentinel? I looked all around me, up and down (mostly up since he has to be above me), but I have no idea where he is scanning me from. Therefore, I have no idea where I can go to hide from him. I think the main problem is that moving the camera around and aiming the reticule is incredibly slow and clumsy. It takes forever to look around you to see where enemies may be or where you can and should move to. Apparently this game can also be played with the Playstation mouse, which I didn’t know existed until right now, and it’s also available on the PC. I’d say it’s probably a much more playable game on the computer, and unless you have a mouse to control it, it doesn’t seem like you can really do too much.

A comparison of the PC version (left) with the much muddier looking Playstation port.

Well I failed to make it through even the first level. In fact, I wasn’t even close. I think that’s as far as I’m going to go with Sentinel Returns. I think I gave it a pretty fair shake, but unless I was to resort to looking up a guide or a video on what exactly to do I don’t think I can really make it much farther, and is that really how you want to play a puzzle game? Like I said, I think it can probably be pretty decent (or at least playable) on a computer with a mouse, but this Playstation version seems pretty weak. If you’d like to see the game in action the way it’s meant to be played, feel free to check out the YouTube video embedded below this, uploaded by spicyechidna94.

So for this entry, rather than giving you my thoughts on the game, I suppose I’ve shared with you my confusion and frustration at trying to figure this one out. I expect that this kind of thing will happen from time to time, and that’s to be expected when you choose games randomly, but that’s exactly what I wanted. Even if I don’t love every game I play, I want to get a feel for all different types of games. Some I’ll love, some I’ll hate, some I won’t be able to figure out for the life of me, and some will probably be downright mediocre. So join me again next time, when the hands of fate shall guide me in an unknown direction, to find an unknown substance, to be injected into an unknown specimen, etc. etc. etc.

64th Street Out Soon For iOS