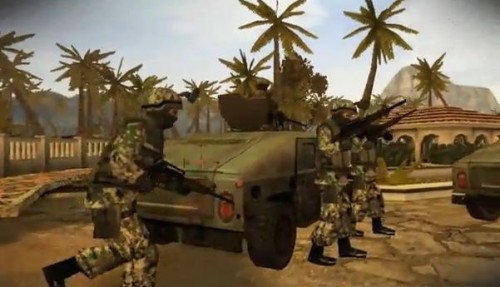 The guys over at Teyon are at it again and are now ready to launch the follow-up to Heavy Fire: Special Ops, Heavy Fire: Black Arms. Black arms looks to play more of the same and will take place deep in the South American jungle, where you are trying to stop an illegal arms trade. If you have played Special Ops for the WiiWare, you should by now be familiar with the on-rails controls that the series offers, and for a WiiWare title, the visuals are still looking as sharp as ever in this sequel.

With interactive and smashable items as well as ever-changing weather conditions, co-op, and an array of vehicles at the players disposal, I must say this sequel has shaped up quite nicely. Teyon announced today that players will not have to wait long to download Black Arms, as it launches on the WiiWare March 7th for just 500 Nintendo points. A new trailer also came in tow with the announcement of a date and price which you can watch below. It may be on rails (which certainly isn’t a bad thing), but this title as a whole has a nice retail polished look about it, much like the first Heavy Fire title so it is definitely worth a look if you are on the fence about where to spend those saved up Nintendo points.