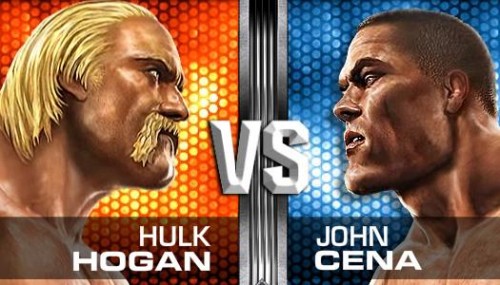 With the release of WWE All Stars right around the corner, THQ have now launched a new facebook app that lets fans get a taste of what is to come while allowing a chance to see some fantasy match ups between the best WWE Superstars of yesterday and today. The WWE All Stars Fantasy Warfare Application pretty much has you watch a video of a match from the new game, pick your favorite superstar, and then click your way through to victory.

While it mainly is just watching clips from the game, your actions do decide which signature moves are performed and as you progress through, “LOOT” is unlocked which consists of vintage wallpapers, “Macho Man” Randy Savage audio clips, WWE Shop discounts and more. What is really awesome about this new app is that new members of the WWE All Stars Roster will be revealed over time as the community shares the app with friends, filling up the bar at the top.

I gave this a whirl myself and while it is simplistic and more of a promotion technique rather than an actual game, I must say it made me really want to try WWE All Stars out even more as it seems to have an emphasis on just being an all out “fun” arcade fighter rather than a wrestling sim the the Smackdown series has drifted into. Either way, check out the WWE All Stars App out for yourself and watch some of this over-the-top action. Who knows, you just might get to hear some more awesome Macho Man quotes for simply sharing it out as well…OH YEAHHHHH!