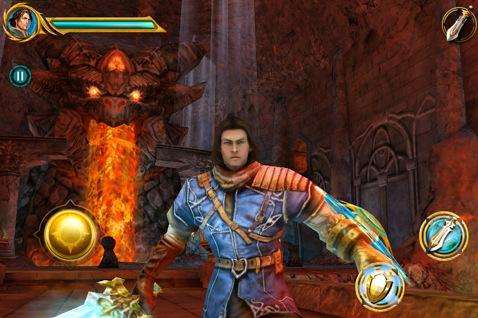 Gameloft have been masters to their craft when it comes to innovation on mobile and portable devices in the past, and their brand new action RPG, Sacred Odyssey: Rise of Ayden is doing that by being a free to play app. You may be scratching your head on this new title that is “free”, but this one goes the route that we have seen many other mobile games take as of late, where the player can jump right into the game and unlock the full version through an in-app purchase.

Sacred Odyssey has players take the role of Ayden, a young hero chosen by a god to save the Kingdom of Lasgalen from the Apocalypse. It is a rather simple plot, but this title does pack a lot when it comes to a wide variety of areas to explore as well as some old school flare that will surely catch the attention of the fans of the genre in general.

AN EPIC ADVENTURE IN A FANTASTIC OPEN WORLD

ALL THE GREATNESS OF A TRUE ACTION/RPG

While this game does indeed look like a deep, interesting Action-RPG, what I really like about it is the free price tag. Yes, you have to pay for the full experience, but by listing it in this way players can base a purchasing decision by how they like the game as they play it. Think of it as a demo on the XBLA or PSN more less for the free version.

Players can now download and give this game a try at the official page on the Apple iTunes Store and those who fall in love with the game can purchase the full version instantly for $8.99. I really think this whole technique that Gameloft is using is brilliant and for all the users out there who end up compulsively filling up their memory on games they didn’t care to try before, I’m sure I can speak for everyone when I say I hope more developers follow suit. As I mentioned, this app is now available to try out, so get to downloading what looks to be a charming and addictive title that is certainly worth looking into.

Shrek Kart Racing coming soon to the iPhone from Gameloft