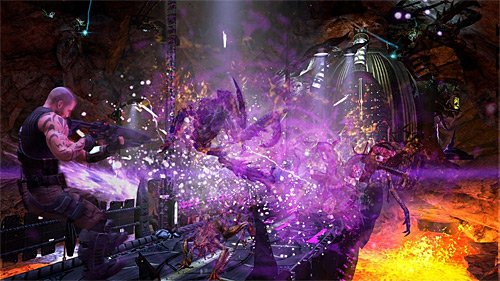 On May 31st spring will be in the air and new life will be springing forth from the trees and the ground as plants come back to life. Of course there are no plants when you live on Mars, especially considering the fact that you will be facing a very dangerous foe unlike any you have faced before in a Red Faction game. THQ and Volition announced earlier today that Red Faction: Armageddon would be seeing a release date of May 31st for the U.S. and June 3rd everywhere else.

Players will jump into the role of Darius Mason and will be forced to explore not only the frozen outskirts of Mars but even the molten core inside of the red planet. The completely destructible environment that the series is known for will return but the new feature of being able to rebuild what you destroy has been added. By using something called a Nano-Forge you will be able to rebuild anything that you tear apart which will allow you to rebuild things at your leisure. The game itself will be coming out on the PS3, PC and Xbox 360.