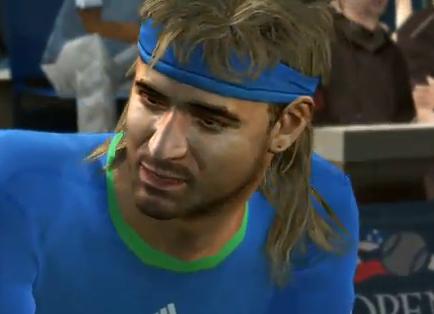 One of the best Tennis players to play the sport will be making a comeback once and for all…at least in Top Spin 4 anyway. 2K Games recently released a new “legends” trailer showing off some of Tennis’ best players that cut for the game’s roster. One of these primed players will include “Vintage Agassi”, who of course is Tennis legend, Andre Agassi. Yes, he will also be sporting his famed mullet. Another player featured in the clip is yet another legend and Australia’s own, Patrick Rafter who will be joining the likes of Boris ‘Boom Boom’ Becker, Michael Chang, Ivan Lendl, Bjorn Borg, Pete Sampras and Jim Courier on the courts.

It also should be noted that Vintage Agassi is a bonus for pre-ordering through EB Games in Australia & NZ, so if you want to dawn the ‘do for free, it would be a good idea to go ahead and get your order in soon as the game launches on March 18th. You can check out some of the 80’s tennis greatness in the trailer below.