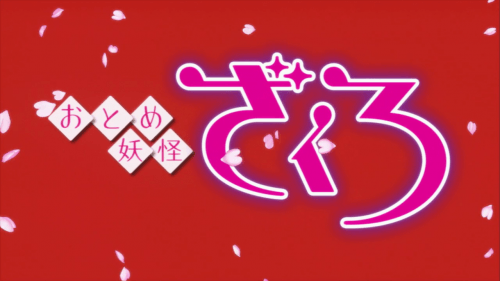 We begin Otome Yokai Zakuro witnessing three of the four female leads we witness Zakuro slice in half a giant monster standing on a bridge. In what otherwise would be an interesting fight scene was finished in under thirty seconds. What I found interesting was the fact that the song/chant that was being performed during the one strike battle actually was extremely addicting and is currently a favorite part of the show.

After this we are introduced to the opening sequence which can be seen below which spoils the pairing of the soldiers and spirits right off the bat and also shows what appears to be the main enemies for the entire season. This is a small let down due to the fact that there is little to surprise as we have already met the main enemy via the opening before they are introduced in an episode.

But I digress, the military has formed a branch consisting of four soldiers to help deal with the spirits which are upset over the change of the calendar and the way Japan is accepting changes from the West. The series quickly takes a turn from what would appear to be a serious romantic show towards comedy as it is revealed that Agemaki, the lead pretty boy, has a deathly fear of spirits (Yokai). 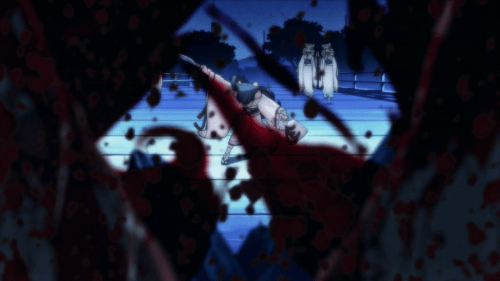 The girls themselves who are half human and half spirit have the appearance of fox-girls with the only difference in their appearance is a pair of fox ears upon their head. Susukihotaru and the twins Hozuki and Bonbori are eagerly awaiting the arrival of the soldiers, while Zakuro is harboring what appears to be a hatred of them though she has yet to meet them.

During the meeting we are further introduced to the soldiers, the pretty boy Agemaki is paired with Zakuro, Riken is paired with Susukihotaru, and the twins are put together with the young Ganryu. Trying to make a good impression Agemaki attempts to charm Zakuro and is very successful in influencing her towards liking him though his fear of Yokai starts to show when two child Yokai run around his feet.

This comes to a head later on as Agemaki tries to find the bathroom, but only stumbles upon continuous Yokai that are far from human in appearance, though are quite friendly. He stumbles into Zakuro and confesses he is terrified to do anything on his own, and breaks apart the illusion in her heart that he is the perfect man.

As the group prepares to view the cherry blossom trees in full bloom they start to develop their relationships further between the partners. Susukihotaru first sees Riken as a huge scary soldier thanks to his body size, but after helping her retrieve something she was having difficulty with, and kneeling down for her to not be afraid she finds him less frightening and more sweet. While Ganryu makes a snide remark about the twins’ hair style seeming similar to a vegetable before scrambling to make up for his mistake.

Once arriving at the cherry blossom grove, the group is met with disdain as normal human onlookers see the Yokai as disgusting and no longer want them to be there. Though the viewing turns violent as a lightning beast crashes down to earth and prepares to attack everyone. After saving a pair of child like Yokai Agemaki is too stunned to move, so Zakuro and the rest of the girls must jump to his aid.

The melodic chanting begins again and we see more of the performance this time around, as Susukihotaru and the twins sway cherry blossom branches around and chant, while Zakuro changes her cherry blossom into a small sword which she uses to pacify the demon beast, though it looks like she stabs it in the head. The lightning beast is no longer enraged and joins the group in viewing the trees as the relationship aspect develops further and Zakuro wonders why such a normally passive Yokai suddenly lost control. 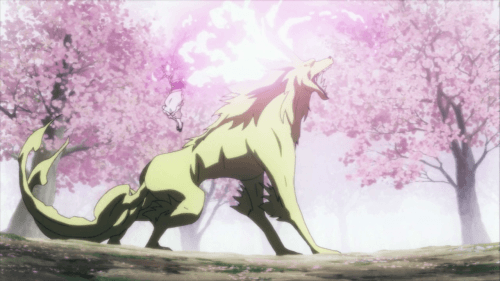 Surprisingly enough the first episode for this series was really amazing. Sure it was more of an introductory episode where we met the characters and saw how they will be fighting and even who will end up paired with who. The chanting part of the fighting is one of my favorite aspects as it puts the fights in another light.

The characters themselves are still pretty vague, with the only ones receiving development being Agemaki and Zakuro. Zakuro herself looks to be another tsundere type character but is more willing to accept Agemaki than your average tsundere which means she may end up leaving behind the character archetype as the show goes on. There is most likely plenty of drama to be had eventually thanks to the differences between the humans and the Yokai as they try to adapt with one another, including the fact that something seems to be making normally calm demons go crazy with rage and attack humans. 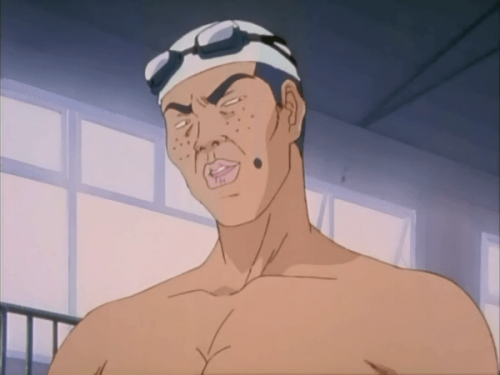