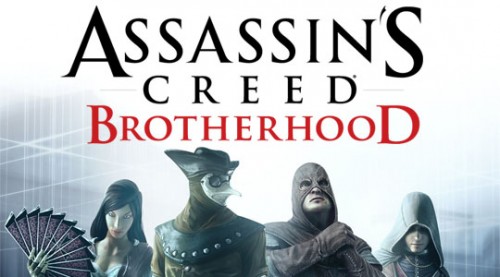 Assassin’s Creed is a fine example of realised potential; the last entry was the epitome of what a sequel should be and one of the best games of 2009. Ubisoft took constructive criticism to a new level and fixed the repetitious flaws of the first game, whilst improving upon the already impressive graphics with solid art direction. What can they do next? A quick story recap: Assassin’s Creed brotherhood continues shortly after where the last game ended. Ezio has returned to his villa, and bounces out of bed to the Templars turning his town into a mess.

Ezio ensures the villagers get out safely, and then a new foe is introduced. Our hero becomes wounded and a murder occurs. Then the story continues with the theme of revenge, but instead of attacking immediately, Ezio bides his time and moves to Rome to recruit new assassins. Once he is healed, Ezio is ready to start seeking revenge once again. Speaking of Rome, Ubisoft has mentioned that the city is three times bigger than any city seen in previous games, which is pretty impressive considering their scope. Considering how quick this game is being turned around since the last, it wouldn’t be a crime to think this might be Assassins Creed 2.5, but rest assured that isn’t the case. The single player game is set to last 10 hours to complete, and much longer for the extras.

As mentioned before, Ezio is out to recruit new assassins to plot his revenge. This is where the idea of “brotherhood” comes into play, a new mechanic called “BAM” is being introduced into the game to manage recruits. Now this may not seem very “stealth” like, but it makes for an interesting concept to have aids in assassinating people. The strategic side this adds to the game gives the impression that the scope of the gameplay, as well as the new cities is larger than the last instalment. Whether this is positive for the game remains to be seen, but the idea of leaving students behind to pursue another target is a good idea.

Playing as Ezio you can mark targets for your minions to kill in various ways, a cool addition to these students is that they level up and learn skills. Ezio as a character is about 40 years old in the story; therefore it makes sense for this to come into play. These additional characters come in varying forms, such as size, shape and gender. Also if they die you have to recruit again and start over, which means you, might actually care about your students. There is a limit to how many students you can recruit, and the exact number hasn’t been confirmed.

Another Major element in single player is toppling Borgia Towers, the obviously corrupt Borgia family has taken over Rome and it’s your job to give the city back to the people by burning the guard towers keeping watch. Once you’ve done that merchants will come in and set up shop. Another search and destroy factor comes into play with Borgia flags across the city, they’re often in hard to reach places and for every flag you find and remove you’ll reduce Borgia’s hold on the city. You’ll also be able to use a mini-hand glider to break falls from high up, which seems pretty cool. I’m guessing Leonardo has something do with it, as he’ll be making another appearance in this game. 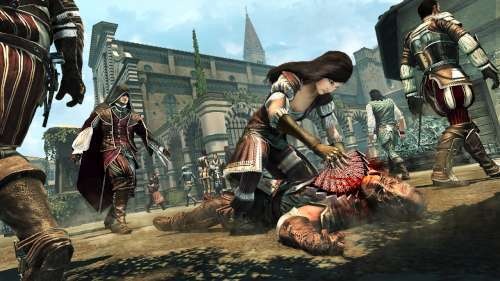 Finally the major innovation to the new Assassin’s Creed is the multi-player aspect, which if you play the BETA you’ll find is pretty darn fun. It could be described as “death from above”, the most fun of all Assassination’s. Ubisoft has learned from multi-player with Splinter Cell and we’re better off for it. If you’re a fan of the kill animations in Assassins Creed, then the multi-player is your forte, because that’s where the satisfaction comes into play. It’s one button assassinations, no real melee combat, and the variety in death styles is vast and fulfilling. The only modes available are wanted and alliance, but this has proved enough fun. The rank system and game mechanics are addictive and compelling enough to keep you busy.

Wanted is basically hunting targets and being pursued by someone else at the same time. You spawn and the player you’re targeting pops up in the right hand corner of the screen. A blue indicator points towards the target helping you find the player, but running directly for the indicator sometimes ends in death as you’re giving yourself away. Stealth becomes key in some situations; however it all depends on the quality of the people you’re playing with. Many times I’ve just run around like a clown popping people off, it only gets hard once you’re in the lead and the game automatically sets more people after the leader. That’s when paranoia sets in and being careful comes into play. It’s a nicely balanced system and makes for some close call matches.

It’s also possible to counter someone who is pursuing you with the circle button, however you can’t kill them. This makes escaping your pursuer all the more satisfying, timing the counter move will result in the assassin being stunned, giving you ample opportunity to bolt. This excitement escalates when you’re close to your own target but are running from someone else. The game basically becomes like a frantic train of people chasing each other to the death, you can escape by either losing your pursuer or hiding in some leafs etc. Stealing other people’s targets is possible as well. While countering can be fun if timed right, this is one mechanic where your latency can become an issue, resulting in lag rage. 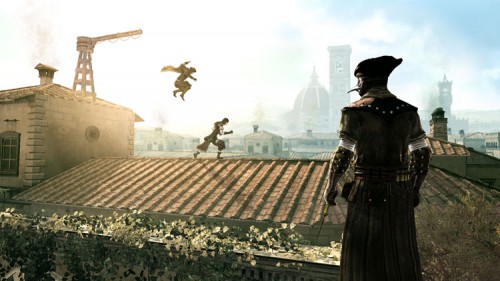 Alliance is the other mode available for now, which is basically coop by setting three teams of two assassins against each other. This mode requires coordination between team-mates in order to win, watching your mates back and working together to kill targets is always fun.

As you level through the ranking system you’re rewarded with more abilities (level cap will be 50), such a smoke bombs, disguises and turbo sprints. This levelling system is similar to something like Modern Warfare, but this game is vastly different to other online games on the market, which makes for a very unique experience. Characters and classes are customisable and I’m looking forward to what the full game will offer.

All positive things aside, this is a BETA so obviously there were some issues and hopefully they’ll be fixed by the time of release. Depending on when I was playing, sometimes it was quite difficult to find a game, sometimes up to 15 mins. However it’s possible to stick with people once you find them by rematching. Another issue I ran into was random freezing of my PS3; I haven’t heard anything of this by other people. It may be I’m the only player with the problem, but it was still frustrating. Other issues included clipping problems with animation during kills, some strange behaviour with models floating in the air and issues with countering my pursuer. Yes, this is the BETA, but they’re worth mentioning.

If you have a PS3, I suggest you pay the dollars to become a PlayStation plus member and get access to this BETA. Even if it’s just for the BETA, you’ll enjoy levelling up before the game comes out. Especially if you’ve become jaded by FPS online games and are looking for something different, then this is the game. Assassin’s Creed Brotherhood is set to release in November 2010 on PS3/Xbox 360, watch out for the review right here before release.