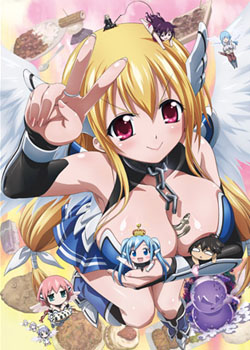 What do you do when an angel with the powers to warp time and space suddenly appears infront of you and will obey any of your wishes and calls you her master? Well if you are Sakurai Tomoki then you are going to use her powers for your own gain. This anime Sora no Otoshimono Forte is actually the second season of Sora no Otoshimono after the first season left it wide open before. The said angels are actually angeloids which come from a different world and have various powers that are beyond human imagination. Needless to say this Anime is very hilarious in appearance and will most likely raise a chuckle out of everyone who watches it, bearing in mind though that some of the humor is very idiotic. But also along with that is the fact that this anime is also considered an ecchi one, which means it will occasionally have acts commited by Tomoki that will cause the girls around him to despise him as a pervert.

The series this time around will see another new angeloid, named Astraea placed into the world of Ikaros and Nymph, the two resident angeloids. Except this angeloid is sent from Nymph’s previous master to eliminate Tomoki for getting in the way of the Master of the Sky’s plan to retake Ikaros back to their world. How will they prevent Astraea from killing Tomoki and taking away Ikaros? Well all I can say for sure is the fact that it will probably result in many hilarious situations. With the a touching romance story mixed in with dumb laughs and a perverted main character this anime sequel looks to live up to the first season’s expectations.