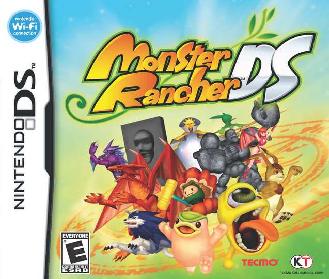 Back in 1999, Pokemon was on top of the world. The craze was in full swing and gamers were also being introduced to all sorts of new titles and franchises, on being Monster Rancher or “Monster Farm” as it’s called in Japan. Many people try to compare Monster Hunter to Pokemon, which you can indeed see the similarities, but they both play completely different as Monster Hunter was mainly focused on breeding, battling and discovery.

New Features are set to include:

Monster Rancher DS is a pure fan service for long time followers. I still remember the excitement of looking for random CD’s and using them for “Monster Rancher 2” to see which new monster I would get.

With the Monster Generator taking full advantage of the Nintendo DS’s features, this game is shaping up to be a big release for the handheld this year. For those who are fans of or looking for an alternative to Pokemon, this title would be the choice to check out.

Monster Rancher DS releases on August 3rd for the Nintendo DS. Check out the trailer below or visit the official page at UFO Interactive’s website here.