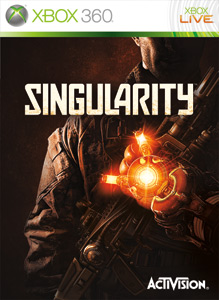 The achievements in singularity are very nice. They push the player to become well rounded and use everything at least for a little while. None of them are that difficult and a majority of them just require you to keep an eye out for possible opportunities to do the achievements at. The achievements are distributed between the singleplayer campaign and the multiplayer. The singleplayer achievements are straight forward and require you to either do everything available to you or progress through the story. The collecting achievements are very nice because there are many more than just the amount you are told to find. Since there are more objects than the amount you need you can play the game regularly without being too distracted looking for stuff, just keep an eye out and you will run into most of them as you play. The multiplayer achievements are also not that difficult. The hardest part is finding games and keeping them running. The next task is to become well rounded with all the characters you can play as because you will need to use each one for their specific achievements. The achievements that require a certain amount of games will take the longest, particularly since most games last 20-30 minutes. Luckily the developers have supplied an area in the main menu that lets you keep track of all the cumulative achievements. This feature lets you know how much longer you have to do a certain task before you complete it.