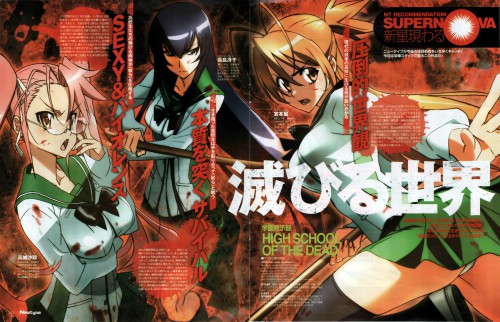 I’m sure nearly every one of us has thought of what would happen in the case of a zombie outbreak. Would you fortify a school? Gather anything you can and hunker down? Or constantly stay on the move?

In Madhouse Studio’s Anime adaption of High school of the Dead there has been a mysterious lethal disease that has spread around the world and has caused billions of people to die simply from the disease. Humanity is still threatened now; not by the disease but by those who have died. These walking dead have begun to attack the living and are slowly decimating the rest of the human survivors.

Now in Japan several high school students and the school nurse have joined together to try and escape their Fujimi High School after it has been attacked by the zombies. As they attempt to stay alive they also are trying to discover what could have caused such a terrible plague and potentially even find a cure.

Now this one is one of the highest on my priorities to watch when it airs July 5th, and I would recommend it highly to anyone who enjoys a good zombie movie or game. It will contain excessive gore though so be warned if excessive gore may upset you