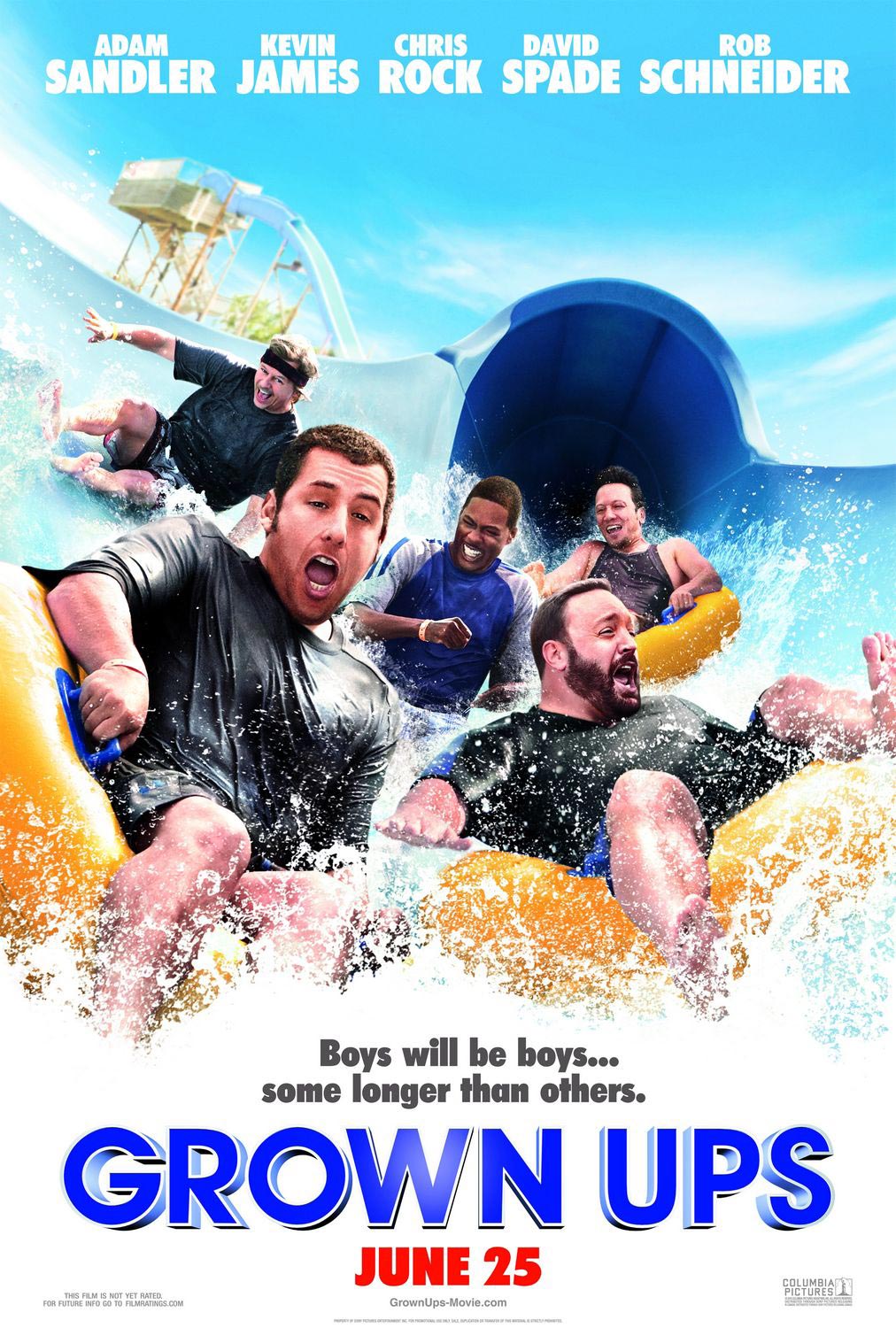 My friends and I went to see the movie ‘Grown Ups’ today. The movie is flat out hilarious depending on your sense of humor. A majority of the humor is banter between the 5 friends. Banter that lines up perfectly with banter you may have with your friends. I don’t know if it was even funnier because it related to my friends and I so much, but the entire theater laughed at a majority of the jokes.

The movie is literally, joke after joke. The plot isn’t that deep, but it is a comedy and succeeds perfectly in making you laugh. Even the most hardened guy would have trouble not laughing at this movie. As for the plot, it includes all five guys finding out that their old coach died and then they all spend a weekend at a lake house to catch up and spread their coaches ashes. That is literally the full story. The movie simply tries to make you laugh, over and over again. I admittedly got tired of some of the jokes by the end, but luckily the movie wasn’t extremely long and I still had a blast with my own friends.

The movie isn’t romantic, and has quite a bit of sexual humor in it that may not be too good for kids below 13. To enjoy the movie to it’s fullest, I suggest to grab a bunch of your friends and flat out enjoy yourself. Maybe grab some wings before the movie, and then go to the pub afterwords. If you intend to bring your girlfriend, I really hope she has a good sense of humor; otherwise you will probably not enjoy yourself. Go watch that new twilight movie with her, we all know you can’t compete with Edward anyway.

Which brings me to a story that has absolutely nothing to do with the movie:

The theater was packed and I was sitting down with two of my friends and the fourth was busy getting popcorn. The previews were playing, and it was taking him a very long time to get that popcorn. He finally made it back, and had to do that awkward shuffle past everyone in the row. He isn’t the most coordinated of guys and ends up hitting the back of a woman’s chair, which gets him the response “What the **** man!”. My friend that bumped into her chair was completely oblivious to what had happened, so my other friend told him to give her an apology. He apologized and was utterly confused as to what happened. I comforted him by saying “Don’t worry about it! She’s a big girl, and she’ll get over it”. I then get an ugly response from her boyfriend, who was trying to be impressive and sound tough. He said “I’m sure as **** not going to get over it!”. We looked at the guy and all four of us burst out laughing at his stupidity.

As the movie ended, we continued making jokes about that guy in the green shirt that got all upset over nothing. We ended up running into him outside in the parking lot, because he had parked right by us. He was still trying to act tough for his girlfriend and one of my friends looked right into his eyes and said “Hey look guys, there he is again!”. I looked at him and burst out in laughter again, as he got all flustered and shuffled into his car. I have to admit though, his girlfriend was pretty good looking. Just a little over dramatic.