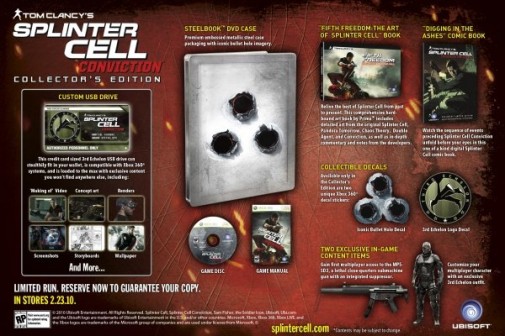 Splinter Cell: Conviction’s Collector’s Edition which is going to be released in America was originally priced at $80. However today Ubisoft has announced that the collector edition’s price will be dropping $10 to a slightly more affordable price of $70.

While fortunate to buyers, the price drop comes from an unfortunate reason indeed. For the Conviction Collector’s Edition will come in a steel case and includes an art book, comic book, decals, USB drive, and an in-game outfit and weapon. However one item included in this collector’s edition is defective and may contain nothing that is advertised. That item itself is the USB drive.

The USB drive was intended to carry large amounts of development information and small goodies for the computer that is inserted into. However Ubisoft performed a “random sampling” of their collector’s edition and as it turns out, the USB drives are completely blank in most cases. Not every one of them was defective so chances are if you receive a USB drive with the information on it, you have just gotten quite lucky.

Though not all is lost for those who have either pre-ordered the collector’s edition or those who are going to purchase it, because on April 15th Ubisoft is going to release information on how to obtain the missing material on the game’s official website.

This information only involves those who of us in America, as the special editions in other countries are meant to vary slightly. The game itself is due for release in the US on April 13th

I’m glad they at least were able to come out an admit that there was an issue with their product as opposed to releasing it with full knowledge of a problem. Not only that but they have also reduced the pricing of said product making it much the better. Ubisoft has pulled a great PR move here in my opinion. Because now they have not only admitted their mistake they are going to make up for it with a price drop in the special edition as well as providing the missing content at a later date. Who’s looking to pick up Splinter Cell itself? Anyone who pre-ordered worried about whether or not their USB drive will contain any data at all?

I Am Alive to live on PSN and XBLA this Winter