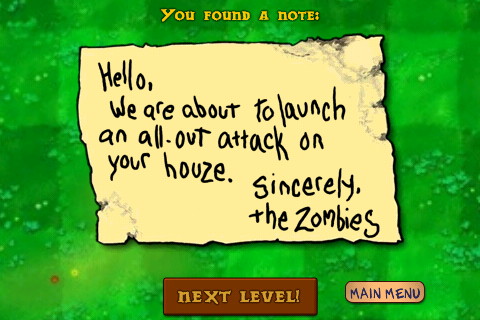 This is amazing !! well done to PopCap Games on this fantastic record breaking achievement.  Plants vs Zombies is possibly one of the most enjoyable game we’ve played on the Apple iPhone.  If you haven’t already checked it out, take a look at our review here and also click on the button below to buy your copy now from iTunes.

DUBLIN, Ireland – February 25, 2010 — PopCap Games, maker of some of the world’s most popular video games, today announced that the iPhone and iPod touch adaptation of its award-winning game Plants vs. Zombies™ sold more than 300,000 units in its first nine days of availability, setting a new record for App Store launches. Plants vs. Zombies shot to number one in the units sold and “top grossing” App Store charts within 24 hours of its launch and remained there until yesterday. At a retail price point of US$2.99, Plants vs. Zombies for iPhone/touch has already grossed more than US$1 million.

Originally launched on the PC and Mac in May of 2009 to universal critical acclaim, Plants vs. Zombies has been expertly adapted for iPhone and iPod touch. Consumers who have purchased the iPhone adaptation agree, with more than 95% giving the game five out of five stars in the App Store’s rating system – making it the highest-rated product in the App Store. Plants vs. Zombies is proving to be a global phenomenon on the App Store, reaching the #1 position on the sales charts in more than 20 countries worldwide including Canada, China, Russia, Australia, Germany, Denmark, Ireland, and Norway. Within one day of the game’s launch, it joined Bejeweled 2 as one of the top five highest-grossing iPhone apps of the week.

“Plants vs. Zombies is our latest major franchise to make the jump to iPhone, and from the early customer and critical feedback it appears to be a great adaptation of the game,” said Andrew Stein, director of mobile business development at PopCap. “There’s always a concern when bringing a computer game to a mobile, pocket-sized device that something will get lost in the process, but in this case the overwhelming consensus is that Plants vs. Zombies is even more fun on the smaller touch screen!”

PopCap Games (www.popcap.com) is the leading multi-platform provider of fun, easy-to-learn, captivating video games that appeal to everyone from age 6 to 106. Based in Seattle, Washington, PopCap was founded in 2000 and has a worldwide staff of over 260 people in Seattle, San Francisco, Chicago, Vancouver, B.C., Dublin, and Shanghai. Its games have been downloaded more than 1 billion times by consumers worldwide, and its flagship title, Bejeweled, has sold more than 50 million units across all platforms. Constantly acclaimed by consumers and critics, PopCap’s games are played on the Web, social platforms, desktop computers, myriad mobile devices (cell phones, smartphones, PDAs, Pocket PCs, iPod, iPhone and more), popular game consoles (such as Xbox and DS), and in-flight entertainment systems. PopCap is the only “casual games” developer with leading market share across all major sales channels, including social, Web portals, retail stores, mobile phones, MP3 players, and game devices.

Holiday themed items are now available for your #XboxLIVE Avatar