Where do we start .. This Christmas Season is going hit our back pockets, wallets, purses harder than a KEN & RYU’s Ha-Do-Ken & Sho-Ryu-Ken’s put together.  With the amount of FANTASTIC BLOCKBUSTER Games scheduled for November and December.  Your going to have to be a little smart and try and grab yourselves a few bargains, if you want to walk away hopefully with a PERFECT Victory.

I’ve taken the liberty to share with you all and especially all our AUSSIE readers the deals you can grab from EB GAMES in Australia.  Now As you are all well aware EB GAMES is also called GAMESTOP in the US and other parts of the world.  So check your local stores for what Bargains and deals they might have available.

Now .. Lets go through some of the block buster titles that will be making their way to your Consoles very soon.  I’m getting GIDDY just typing this right now 😉

Possibly the Game Of the YEAR, Infinity Ward’s First person action military shooterModern Warfare 2 due out for release on the 10th of November.  Now if you can read the deals on the pic above.  Let me give you a brief run down on what you can do to grab this this game.

Now if you want to upgrade your Xbox 360 to this Limited Edition Modern Warfare 2 Xbox 360 console with a 250GB HARD DISK, all you have to do is simply bring in your old XBOX 360 Elite with a 120gb hard disk and you can walk away with the Limited Edition Console, 2 FREE Games one of which is Modern Warfare 2, Forza 3 Motorsport & two Xbox 360 Controllers.  All this for a LOW price of $379 (AU)

Now if you don’t want to upgrade to a new Xbox and you want Modern Warfare 2 (STD EDITION) for FREE.  All you have to do is trade 3 SELECTED GAMES (see in store for a list of eligible titles)  And your done.   You get rid of your old games and walk away with the game of the year without even spending a single dollar.  Pretty sweet deal.

Now if you don’t want to part with your old games and want to pick up Modern Warfare 2, there are 3 types available to purchase.

Reports of the Prestige edition at this state in AUSTRALIA, have sold out.  But I would recommend going in and checking to see if it’s still available for PRE-ORDER.

This ends part 1 of the special deals.  Check back in a few for the next bargain from EBGAMES/GAMESTOP 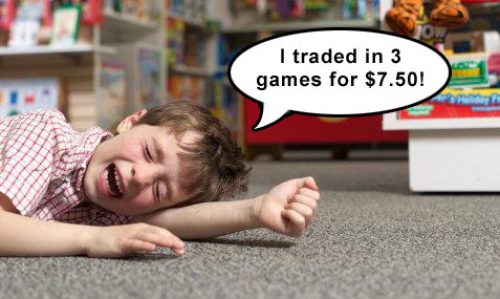