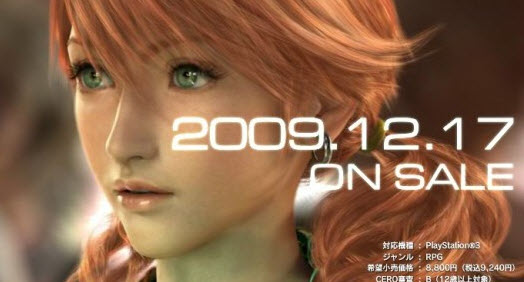 At a special event in Tokyo, Square Enix announced today that Final Fantasy XIII will be released in Japan as a PlayStation 3-exclusive on December 17. This date is confirmed on the game’s official website. It will sell for 8,800 yen, $95(USD)

The game’s western release remains unknown, but Square Enix is hoping to reduce the usual localization period of about six to twelve months.

“We can’t announce any specific dates yet,” said series executive producer Yoshinori Kitase at the event. “But in the past, it took about a half a year to a year. We’re hoping that this time, we can release it with only about one season’s worth of a delay.” Provided such a schedule were indeed met, western gamers might be seeing Final Fantasy XIII (on both their PlayStation 3s and Xbox 360s) as early as March or April of 2010.

Lets keep our fingers crossed and hope that Square Enix can complete the localization as quickly as possible.  I have already pre-ordered my copy of FFXIII.